James White has been competing for the Leven Gold Medal since 2004 but now he joins the same winner's board as Lee Westwood and Andrew Coltart. 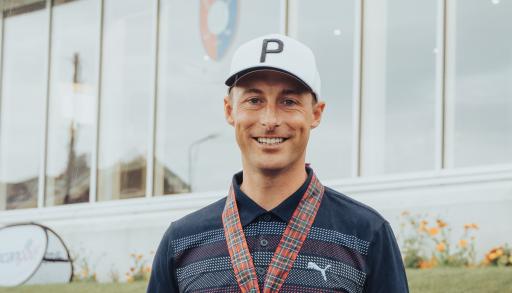 Amateur golfer James White has been competing for the Leven Gold Medal since 2004, which was the year after his father Jim won the same tournament that always alluded him.

Now, not only has White matched his dad's achievement 18 years ago, but he has also etched his name on the same winner's board as European Tour players Lee Westwood and Andrew Coltart.

"I've been quite amazed at the reach it has had to be fair from a lot of people from all over Scotland. I work in golf and deal with the pro shops and retail and because of this, the guys have seen the coverage online and they’ve congratulated me."

After his third-round 65, White was in cruise control at Leven Links, a course he was very much familiar with. He held a four-shot lead with 18 holes remaining and he felt calm in contention.

Earlier in the season, White won the East of Scotland Open and so he arrived in search of the Leven Gold Medal in fine form and full of confidence.

"I felt good, I've been in that situation a few times," White added.

"There have been times in the past where I may have felt more nervous but I felt calm and I was surprised at how calm I felt.

"There was a decent crowd, as it was a local event. I asked on the 16th where I was and someone said I had a two-shot lead and the guy who was two behind had already finished, so I knew what I had to do.

"I knew where I stood and I had a better idea of what I had to do to get the job done."

In 2013, White turned professional and attempted to make a career in competitive golf on the Alps Tour, but now he enjoys the balance between his work as an area manager for Cobra and playing golf at the weekend.

But much like the amateur world of golf, White discovered how difficult it is to fight your way to the top of the leaderboards. Golf is such a competitive sport and every golfer has the same dream of competing on the European and PGA Tours.

White used to travel all over the country to 72-hole amateur events and to prestigious tournaments such as the British Amateur Championship, but now his travel is work-based and he has achieved a nice balance between work and play.

"I know my game isn't good enough for the professional game, I don't hit the ball far enough and I found that out pretty quickly when I turned pro back in 2013.

"There's definitely a nice balance. The amateur 72-hole circuit is dotted around the country. Because I travel so much midweek with work, I don't want to travel on the weekend. I used to do that when I was younger."

It is no secret that you need determination and perseverance to succeed in golf, whether it is the amateur or professional game. Now for White, he can sleep with that little bit more relief knowing that he has finally secured the Leven Gold Medal.