Padraig Harrington and his caddie carried a dead branch away from his ball during the first round of the Irish Open. 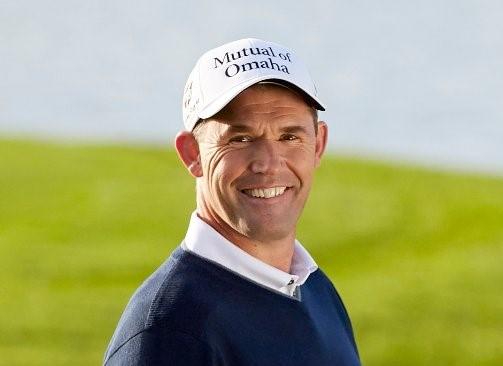 Padraig Harrington sparked a social media reaction when he and his caddie carried a large branch away from his ball during the opening round of the Irish Open.

This week, Harrington was supposed to be leading the charge as captain for Team Europe at Whistling Straits for the 2020 Ryder Cup, but due to the fact that no spectators are allowed at golf events right now, the biennial event was pushed back to next year.

Instead, Harrington is taking part in his home country's open at Galgorm Castle, 30 miles away from where Shane Lowry won the Open Championship at Royal Portrush last July.

RELATED: Shane Lowry "was always going to play" in Irish Open as long as it went ahead

On his way to shooting a 1-over par score of 71 on Thursday, Harrington found some trouble when his ball completely missed the fairway and flew into the trees.

Luckily for Harrington he found his ball in the depths of the woods, but a rather large branch was resting alongside it.

Due to the branch no longer being attached to the tree, it was classed as a "loose impedement" the same as a stone would be in a bunker or a leaf by your ball.

The three-time major champion and his caddie decided to pick the branch up together and carry it out of the way so he could get to his ball. Watch the incident in the video below:

According to the R&A's Rules of Golf, section 15.1, the rule on loose impedements states: "Without penalty, a player may remove a loose impediment anywhere on or off the course, and may do so in any way (such as by using a hand or foot or a club or other equipment)."

Once the video was posted on the European Tour's official Twitter account, golf fans flooded the comments section.

"That's in the Patrick Reed book of ball improvement tips," said one person.

NEXT PAGE: Golf fans relate to Justin Rose after he SNAP-HOOKS drive during exhibition match