Pro makes ace on PAR-4 (!) one day after her golf bag fell into a lake

This Epson Tour pro had an interesting week. She lost her golf bag to a water hazard, then made a hole-in-one on a par-4 24 hours later. 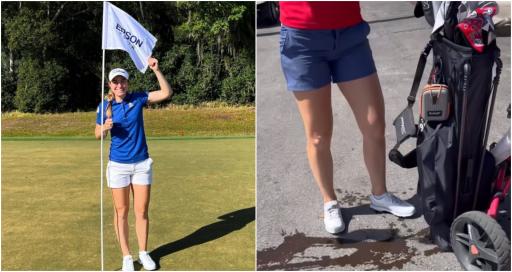 A general rule of thumb if you are using a push cart on a windy day is making sure the break is on.

Last week, Epson Tour player Luna Sobron Galmes was finishing up for par in round one at Florida's Natural Charity Classic.

The only problem was she did not leave the break on and a gust of wind propelled her Titleist golf bag into a water hazard. Cue frustration.

Strangely, a day later she returned and made a hole-in-one...on a par-4. She did not see it, but she heard the cheers.

"It's impossible to make it from that distance," Sobron Galmes told Golfweek. "It's crazy."

We are realiably informed the club of choice was a 3-wood from the 27-year-old Spaniard at the fifth hole, measuring at 247 yards.

On her Instagram account, there is a video of her pouring out the excess water. There was a defiant message: "Never surrender".

She made the cut with two clutch birdies, then eventually finished in a tie for 24th, collecting $1,762 for her efforts.

We're not sure how much water damage there was. You can see that her range finder did look a bit soggy. Those aren't cheap.

Kum-Kang Park won the tournament and collected $30,000. But the most interesting week belonged to Sobron Galmes.

How crazy is this sport, she asked. But she added: "But that's why I love it." Never a truer word has been spoken.

Watch the videos below