Rules Debate: Is this golf ball classed as IN THE BUNKER?

If you are ever unfortunate enough to find your ball in this situation, you need to know if it is in the bunker or not. 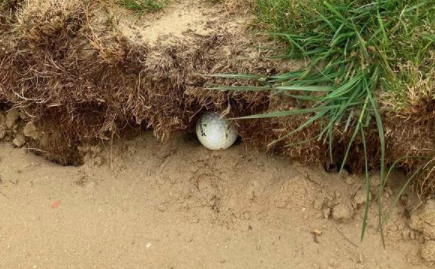 The rules of golf can throw up a lot of drama and controversy and we have seen many different flashpoints on the PGA Tour and the European Tour over the years.

Bunkers and sandy areas have caused some contentious situations before, such as when Dustin Johnson lost the 2010 PGA Championship when he grounded his club in the sand at Whistling Straits.

Sometimes, there can be a grey area with sand and it is not always clear if your ball is in the hazard or not, so we want to clear this rule up for our readers.

As you can see in the picture below, posted by golfrules_questions on Instagram, the ball has finished in an almost impossible position below the lip of the bunker.

There is a question as to whether this ball is classed as being in the bunker, because if it wasn't, then there is potential to gain relief from an embedded lie.

However, Rule 12.1 states that if a ball is touching sand inside the edge of a bunker, then it is therefore in the bunker. So in the picture, the ball is in the bunker.

RELATED: RYDER CUP 2021: GET TO KNOW THE VICE-CAPTAINS HEADED TO WHISTLING STRAITS

This is an example of how the rules can be confused but it is also an example of the incredibly unlucky situations that you can find yourselves in on the golf course.

Bunker shots can be very challenging at the best of times and they are the arch-nemesis of many golfers, so make sure you keep away from these traps so you don't experience a break like this.

NEXT PAGE: KEVIN NA ON MISSING RYDER CUP CAPTAIN'S PICK: "DO I DISAGREE? YEAH I DISAGREE"