This NBA fan won $50,000 for sinking a full-court 94-foot putt and then went wild with his celebration. Why wouldn't you? 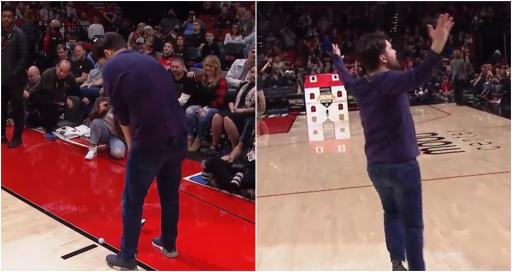 This basketball fan went absolutely ballistic after sinking a 94-foot putt to win $50,000 at an NBA game.

The lucky fan, named David, was picked at random from the crowd during the Portland Trail Blazers' match against the Houston Rockets.

He was given one shot to sink the full-court putt. Watch the video below and see his reaction. We tentatively suggest he enjoyed that.

From 10 feet, PGA Tour pros average 41.25 per cent. So some fans suggested making that putt warranted a bit more cash given that the pros average making just one per cent of putts from that range.

David steps up and takes a shot practise swing. He gives the putt the full beans and it goes racing towards its intended target - a model house on the opposite baseline - before celebrating wildly.

How about that, huh?!

It reminded us of the elation we saw from the Miami Heat fan who once won $75,000 after he drained a one-handed hook-shot from half court.

That fan was given a bear hug from LeBron James as the crowd went wild.

Portland have had a dreadful season so far, having lost 46 times and sit 12th in the Western Conference. They have won 27 games.