WATCH: Would you peg it up with this WILD CHEETAH on the tee box?

The footage shows the big cat jumping between the tee markers, before running off into the wild. 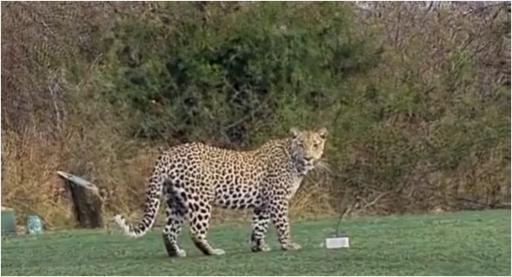 We've all heard of a big cat on a golf course, but usually, we're thinking about the one and only Tiger Woods.

But footage has emerged of a big cat jumping around a tee box in South Africa.

In the short clip posted on Instagram, the cheetah jumps around and stares at the cameraman before playing with the tee markers.

The course the footage was taken from was Skukuza Golf in the Kruger National Park, about 250 miles from Johannesburg.

Remarkably, the course is located inside the park itself.

It means odds are you're going to be treated to wildlife up close and personal during your round.

The club markets itself as the best club to get as "close to nature as you can get" with beautiful trees, birdlife and picnic areas.

Thankfully, they have park staff on hand at all times during the day to keep dangerous animals away.

They say no golfer has ever been injured or harmed.

Yet they do say a lion once killed a buffalo on the first green.

On another occasion, a honeymoon couple's golf game was interrupted by a pack of wild dogs chasing an impala across the course.

But golfers are made to sign an "indemnity form" before teeing off.

One social media user joked they've played with much bigger "cheetahs" than that.

While another added: "How many deaths a season?"

Another joked: "Had to skip a few holes on the back nine, a guy was getting mauled - really slowed downplay."

NEXT PAGE: FROM NEAR DEATH TO THE EUROPEAN TOUR