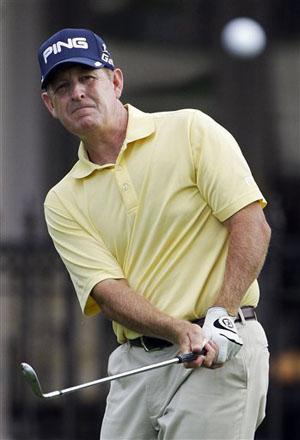 A few years back we got to know American golfer Jeff Maggert quite well. We exchanged correspondence, through a mutual friend and finally got to meet at the US Masters at Augusta National in 1994, when we got a tap on the shoulder in the press room.

He always looked a little dour on the course but that was his way of concentrating. But when he got excited, like he did when he became the first player to win $1million in claiming the WGC World matchplay title, chipping in at the second extra hole to beat Andrew Magee in 1999, he let his emotions flow.

He also got pretty excited in 1994 when he became the first player to achieve an albatross at the par-5 13th, holing his 5-wood approach.

As well as being a straight driver and a determined putter under intense pressure, he is still one of the tidiest players on the PGA Tour with a wedge from 30-40 yards as well as around the green.

He once explained his theories to us about using these clubs and how important it was to find a feel when hitting these hand and arms shots.

"Club golfers aren’t the only ones to find partial shots difficult. Pros have to work at them real hard, too," he told me.

"My practice technique is to take about 15 balls and pitch them at a target from 30 yards, then take 15 more and move out 10 yards further. It’s all about grooving your swing and building muscle memory.

"That might not sound easy for those amateurs who play only once a week or less, but it’s the only way."

And a key thing to remember, said Jeff, is because these are partial shots don’t let up and decelerate through the ball.

"You’re trying to hit the ball a short distance but you control that with the length of your swing – back and through. No matter what, you have to accelerate smoothly through impact."

Want more short game tips? Check out our guide to chipping like Phil Mickleson and short game with Freddie Jacobson

Ace your technique when attempting a PITCH shot with a wedge
The correct technique to use when chipping with a wedge
Golfmagic Staff
wedge
guide
Maggert
chipping and pitching
youtube short game vids
Previous
Review: Cleveland Classic XL driver
Next
Justin