Shilton shares a lesson from Mouland 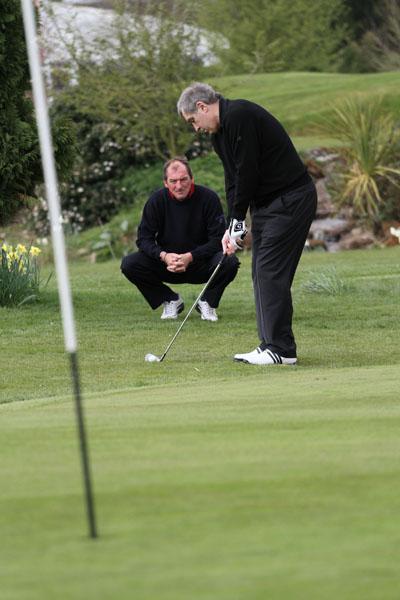 Golfmagic offered Peter Shilton, the former England, Nottingham Forest and Leicester goalkeeper, a series of lessons with former Welsh World Cup golfer Mark Mouland at the Nailcote Hall near Coventry which stages the Farmfoords British Par-3 Championship from August 10-13, when Peter will also be playing the pro-am.

Chip and run from 20 yards

Says Mark Mouland: "This can be a real par-saver for Peter and played correctly it's the kind of shot that he can get away with murder.

The club: "I suggest he always takes an 8-iron. Anything straighter faced and the ball could get away from him, anything more lofted and there's the tendency to fluff it. The beauty is that with this club you can get away with murder and with less loft than a wedge, the ball will tend to run up to the hole.

The execution: "Using an 8-iron he won't need much of a backswing or a through swing to make the appropriate distance. With too much swing, problems can occur with too many moving parts. Taking an 8-iron reduces the risk of hitting poor shots and increases the chances of more consistency.

Remember: "It's all about feel, so grip the club lightly, slightly down the shaft with a similar pressure to holding the putter. You don't want to strangle it as that only creates pressure. Visualise the ball lofting gentle on to the green and running up to the hole. Keep it smooth, relax and imagine it as a long putt."

Says Shilton: "As amateur golfers, we always tend to reach for the most lofted club for a shot like this but the 8-iron makes so much more sense and with such a short swing needed, there's not too much that can go wrong."