Gary Player says there is "a place in the sun" for the PGA Tour and the Saudi-backed LIV Golf Invitational Series. 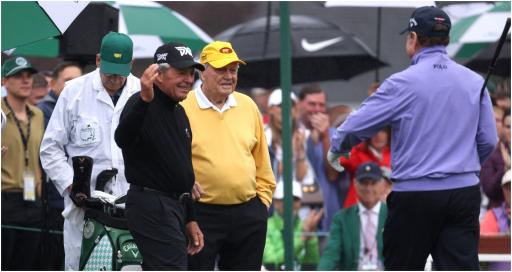 Nine time major champion Gary Player says the players who are departing the PGA Tour for the riches of the Saudi-backed LIV Golf Invitational Series "need the money" because they have families.

Player was speaking to Sky Sports from the home of golf at St Andrews after fellow South African Charl Schwartzel won the richest tournament in the history of golf.

Former Masters champion Schwartzel, 37, scooped $4.75million for three days of work at Centurion Club at the inaugral event of the global series which threatens to completely change the landscape of professional golf.

The PGA Tour have issued bans for current and future members who decide to play in the series, which will head to Portland next month. Patrick Reed, Pat Perez and Bryson DeChambeau are the latest players to snub the PGA Tour.

"That's the one thing that I do not enjoy is to see people on both sides really being critical of the other," Player said.

"Golf is such a wonderful game and we must never forget this; the heart of the game is the amateur not the professional.

"But what saddens me is to see [the] fighting that is going on and it is unnecessary. The PGA Tour will always have the best and strongest players in the world.

"A lot of people are giving a lot of opinions, and know a hell of a lot about nothing!"

"This tour which the Saudis who, by the way, are our allies. We must never forget that. I hear a lot of detrimental things being said.

"But remember this, the players that are playing there now; they need the money. They've got families and I don't blame them for playing.

"Not a lot of them can win on the regular tour anymore so they are wisely taking the money. But remember, the PGA Tour is the strong tour.

"There is a place in the sun for both tours. And I just hope they settle everything in an amicable way and we can go from strength to strength, because golf is a passport to the world."