Brandel Chamblee has broken his silence after a judge dismissed the $750m defamation lawsuit lodged by LIV Golf's Patrick Reed. 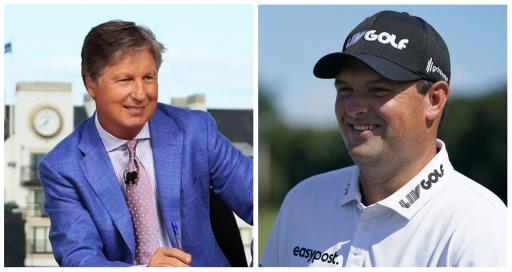 It's not exactly an outrageous suggestion that when you are being sued it's probably a good idea to keep schtum.

That's exactly what Chamblee has done since Reed filed the lawsuit in August.

The American, 32, initially withdrew that lawsuit that was filed in Florida only to refile it and add more defendants.

That lawsuit alleged that the defendants:

"Conspired as joint tortfeasors for and with the PGA Tour, its executives, and [tour commissioner Jay] Monahan to engage in a pattern and practice of defaming Mr. Reed, misreporting information with actual knowledge of falsity and/or reckless disregard of the truth, that is with actual and constitutional malice, purposely omitting pertinent key material facts to mislead the public, and actively targeting Mr. Reed since he was 23 years old, to destroy his reputation, create hate, and a hostile work environment for him, with the intention to discredit his name and accomplishments as a young, elite, world-class golfer, and the good and caring person, husband and father of two children that he is."

Reed's lawsuit did not include the PGA Tour but the 4 Aces GC player claimed the organization was working with the Golf Channel to purposefully destroy LIV Golf.

"Failed to give Defendants notice of the grounds upon which each claim rests because Reed alleges 120 factual allegations, then proceeds to incorporate all 120 allegations into each and every count. … Reed attempts to allege various defamation and civil conspiracy violations against each Defendant; causes of action which require vastly different factual allegations."

Chamblee simply reacted to the lawsuit being dismissed by writing on social media:

Random thoughts on a Friday night… if you’re a lawyer shouldn’t you understand the essence of the first amendment and for extra credit the definition of the word frivolous.

Now Reed and his attorney - Larry Klayman - have until 16 December to refile their complaint and were reportedly instructed to revaluate the claims.

The judge said that the Reed was only to:

"Bring only those claims that are meritorious and supported by law."

Related: Why Phil Mickelson's involvement in antitrust case is not over

Reed will refile the complaint, his attorney has confirmed. In a statement issued to the media, Klayman said:

"Mr. Reed is pleased that the Court sustained diversity jurisdiction and set a deadline for the Defendants to respond to our soon to be filed amended complaint, which will add yet more defamatory statements that were published after the initial complaint was filed.
"The order deals with the form of our pleading, which is easily addressed, not the substance of the allegations, which are strong. Mr. Reed and other LIV players have been maliciously defamed, and this case is designed to put an end to this, once and for all."

This is not the only lawsuit Reed is involved in. In November he lodged another complaint - this time wanting $250m in damages.

That lawsuit is brought against the golf writer Shane Ryan, Hachette, the New York Post, Fox Sports, Doug Ferguson and the Associated Press.