Brooks Koepka's brother chase has opened up in living in his brother's shadow and what he said when he informed him he was joining LIV Golf. 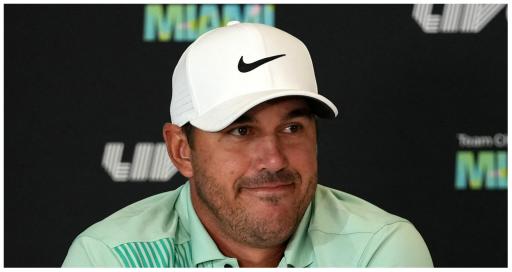 Brooks Koepka's brother Chase has revealed the four-time major champion laughed down the phone when he told him he was joining LIV Golf, telling him: "I'll finally have to answer questions about you."

Chase signed a two-year contract with LIV Golf in early 2022. When the series played their inaugural event in June at Centurion Club, there was a lot of chatter about if and when Brooks would be signing with the breakaway tour.

At the time, Brooks had always rejected suggestions he would leave the PGA Tour, insisting in February that the elite professional players "had enough" money.

"Someone will sell out," he famously said.

Brooks reportedly signed a deal worth more than $100m with the Saudi-funded enterprise and pegged it up in their second tournament in Portland.

The brothers are now in the Smash GC team, captained by Brooks.

When LIV concluded their $255m eight-event season in Miami, Smash GC had Americans Jason Kokrak and Peter Uihlein also in their ranks.

Related: How much money every LIV Golf player won in 2022

Brooks won the Jeddah Invitational in October, scooping $4m and made the promise to buy his brother a lime green Lamborghini.

Now Chase has given a wide-ranging interview to Ryan French of The FirePit Collective.

Chase opened up about life in his brother's shadow and struggles with depression while playing on the European Tour as he watched his brother's meteoric rise.

His father also made the claim that when the pair were growing up many believed Chase would be the better player.

"I couldn't find any peace on the golf course. The one thing I had loved my entire life, I hated. I just wanted to go home. I didn't want to play any golf."

"I am very proud to be Brooks's brother, but it hasn't always been easy."

Chase said during his depression his brother gave him some tough love, such as simply telling him he needed to work harder.

He did. And he also reportedly employed a life coach to get him out of the pits.

On the subject of LIV Golf, Chase said that Brooks was previously involved in talks with commissioner Greg Norman about a potential move before he signed.

But he broke it off. We do wonder exactly what happened there.

Chase said when he told his brother he had signed for LIV, his brother laughed on the other end of the line and said:

"I'll finally have to answer questions about you."

LIV Golf will play 14 events in 2023. As many as 60 players will be involved in the global schedule.

The most recent news is that LIV have confirmed a multi-year deal to bring their tournaments to Australia.

The Grange Golf Club in Adelaide will host the debut event next April.

Next page: Marc Leishman "fine" if he's banned from the majors