LIV Golf's Marc Leishman says it would be "fine" if he was unable to participate in any more major championships after signing with the breakaway tour. 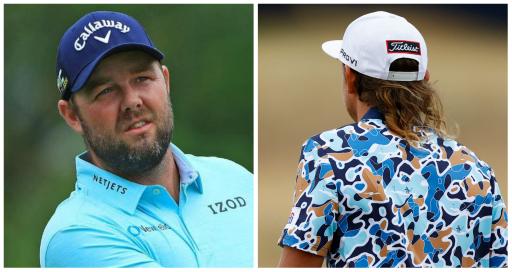 Marc Leishman says "it's fine" if he were unable to tee it up in a major championship ever again after joining LIV Golf.

The 39-year-old Australian was snapped up by the breakaway tour in August following the conclusion of the PGA Tour's FedEx Cup playoffs.

It was the same time they announced their $150m marquee signing of Cameron Smith after he lifted the Claret Jug at the 150th Open Championship.

Leishman is just one of four players who plays in an all-Australian team. They are captained by the aforementioned 29-year-old Smith.

The other team members are Wade Ormsby and Matt Jones. Jones is one of three players who still remains involved in the antitrust lawsuit that was lodged against the PGA Tour in the summer.

The side are called Punch GC. Smith reportedly owns a 25 per cent equity stake in Punch.

LIV Golf hope to soon start selling off their teams as franchises.

Along with a much-needed TV deal, this is how the Saudi-financed tour is hoping to recoup their investment.

The Saudi royal family have reportedly already ploughed $2bn into LIV so far.

As for Leishman he has never won a major championship but he has come close. At the 2015 Open at St. Andrews he lost in a three-man playoff that was won by the American Zach Johnson.

There is no doubting that Leishman has game. He is a six-time PGA Tour winner who has participated in four Presidents Cups.

Leishman was also the PGA Tour's Rookie of The Year in 2009.

But since joining LIV he has seen his world ranking plummet. He is now the World No. 71. Leishman's highest position was No. 12.

Only the top 50 players at the end of the season will automatically qualify for the first major of 2023 at Augusta National.

Leishman's response to the The Sydney Morning Herald was that if the situation isn't resolved then he'll simply just watch the majors on TV.

"I've played at pretty much all the majors for the last 12 or 13 years. I've had my chances. Obviously, I want to play them, but I'm fine not playing them.
"I'll try to qualify for the British Open and the US Open and if the world rankings happen, I'd love to get into The Masters. If not, I'll watch it on the TV and hopefully watch Cam win it."

"I've loved my time on the PGA Tour and I certainly enjoyed the transition,” he said. “That was one of the things that drew me to it. I’m not getting any younger and you can play golf forever, but you don’t know how high a level you can play at as you get at into your 40s.
"After playing, that’s going to be certainly something to work with and hopefully we can build the franchise and be a part of it when golf is done."

Leishman's comments come as Golf Saudi ambassador Gary Player made this interesting remark about players cashing in with LIV.

Elsewhere, Rory McIlroy has called on LIV Golf's commissioner - Greg Norman - to resign if there is to be some sort of compromise.