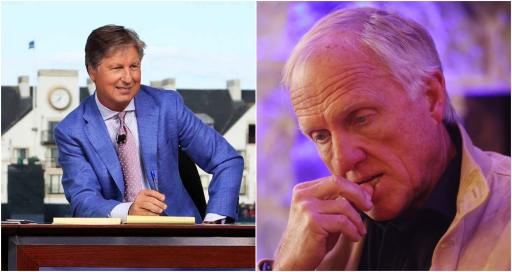 Brandel Chamblee says he would turn down an offer of $100million to be the lead analyst of a Saudi-backed golf series.

Chamblee, a one-time PGA Tour winner and now a renowned analyst for Golf Channel, has been slamming the forthcoming LIV Golf Invitational Series in recent weeks and months.

"Greg Norman is doing for LIV Golf what Jamal Khashoggi's murder and dismemberment should have done," Chamblee posted earlier in the week.

His comments came off the back of Norman's "we all make mistakes" remark when pressed about the murder and dismemberment of the Washington Post journalist.

Norman has denied being complicit in a sportswashing operation and said he was independant of the crown prince of Saudi Arabia, Mohammed bin Salman, insisting that he "does not answer" to him despite LIV Golf Investments being bankrolled by the Public Investment Fund.

When his comments were shared widely across social media, Khashoggi's fiancée reacted by saying what he said was "so hurtful", adding: "What would you say if it was your loved one?"

Chamblee, 59, has described LIV Golf as about "politics" and "a murderous ruler, MBS, wanting to hide his political motivations by giving the appearance of reform".

He added: "His reform is cosmetic while his rule is autocratic".

When asked on social media, Chamblee said he wouldn't take a million dollars to build a golf course in Saudi Arabia and he wouldn't accept $100million to be a lead analyst of the series.

This week, the PGA Tour and DP World Tour both drew a line in the sand by denying their members releases to participate in the first event of the Saudi-backed series at Centurion Club.

There are eight, $25million events in the global series. Norman says a further $2billion will be pumped into it over the next few years as it expands.

What happens next is likely a legal battle if players participate anyway and face fines, suspensions or bans from the main tours.

Norman has promised that LIV Golf will financially and legally support players in court if they wish to go down this route.

What do you make of the current situation regarding the LIV Golf / PGA Tour drama? Let us know on our social media channels.