"Because they don’t understand the nature of golf," says Chamblee about LIV Golf. 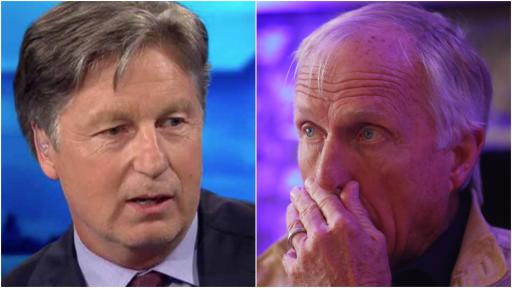 Greg Norman and LIV Golf think they are doing everyone a favour in growing the game with a shotgun start ahead of their opening event at Centurion Club this June, but golf analyst Brandel Chamblee believes this format change will prove something of a turn off.

Chamblee, a one-time PGA Tour winner and now a renowned Golf Channel analyst, considers a shotgun start takes away the rise and fall of action as golf courses are purposely laid out by holes 1 to 18 in order to frame a tournament.

LIV Golf recently confirmed that their events will comprise of 54 holes over three days and there will be a shotgun start to help speed up the action for viewers.

When it comes to action on the PGA Tour or DP World Tour, players will start on the 1st or 10th holes.

The leaders on the weekend will start off the 1st, with those further down the leaderboard going off the 10th.

With the new LIV Golf Invitational Series events, however, that will not be the case.

Each of the 48 players will be finishing on completely different holes as a result of a shotgun start that sees groups all tee off at exactly the same time but on separate holes.

You could therefore have two players fighting out the finish in the final round at Centurion Club, with one of them finishing on 18 and the other finishing up on hole 3.

Related: LIV Golf to drop $2 BILLION investment into an expanded schedule through to 2025

In a LIV Golf press release this week which confirmed they would be investing $2 billion into an expanded schedule for 2023 through to 2025, they said the shotgun start would "ensure a faster and more exciting pace" to the tournament.

Chamblee, who like many is already not a fan of what LIV Golf have proposed with their controversial new series backed by Saudi millions, tweeted his views about the shotgun element when replying to last week's PGA Champions Tour winner Steve Flesch.

"What exactly is the point of a shotgun start, in what they’re portraying as a serious Tour, with only 48 players?" tweeted Flesch, who won the Mitsubishi Electric Classic last Sunday, just as he did in 2018.

Because they don’t understand the nature of golf; that the order in which the holes are laid out by the architect provides a rising and falling of action which frames an event. Imagine a shotgun start at the TPC Sawgrass and a player starting on 17 vs another player on 4 or 6. https://t.co/fLFkYicRsl

"You can start the whole field in practically 2 hours. The leader, could be 8 under on Sunday will be finishing on 15."

Chamblee was in complete agreement.

"Because they don’t understand the nature of golf; that the order in which the holes are laid out by the architect provides a rising and falling of action which frames an event," replied Chamblee.

"Imagine a shotgun start at the TPC Sawgrass and a player starting on 17 vs another player on 4 or 6."

Will you be tuning in to watch the LIV Golf opener at Centurion Club? Share your thoughts and comments about it all over on the GolfMagic social media channels or come and visit us over on YouTube.