Bryson DeChambeau Net Worth: What is the LIV Golf Tour pro worth?

Bryson DeChambeau reportedly received a nine-figure sum to join the LIV Golf Series earlier this season, but what is the former US Open champion actually worth? 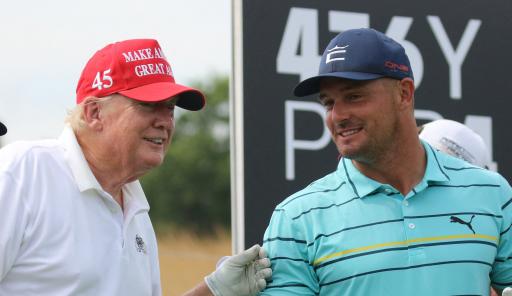 Bryson DeChambeau is one of many PGA Tour stars to make the controversial switch to the LIV Golf Tour in 2022 and he has already reaped the lofty financial rewards.

In just two events, the Portland Invitational and the Bedminster Invitational, the 28-year-old has earned $711,000. In eight appearances on the PGA Tour schedule, he has earned $519,928.

DeChambeau admitted that his decision to defect to the Saudi-backed series was a business one, however, he also intends to continue his work with the National Kidney Foundation and build a multi-sports complex.

LIV Golf commissioner Greg Norman has managed to recruit some of the most divisive and controversial figures in the game such as Patrick Reed and Brooks Koepka and DeChambeau is just another one.

From his Long Drive antics and his bomb and gouge techniques to his prolonged feud with Koepka last season, there are many reasons as to why DeChambeau has become one of the largest crowd-drawers in world golf.

Since joining the Tour in 2017, he was won eight times and become a major champion. In 2020, he emphatically won the US Open by six shots and this has contributed to his career earnings of $26,519,235.

Despite being dropped by Rocket Mortgage as a result of his association with the LIV Golf Invitational Series, DeChambeau still has a healthy and lengthy number of endorsement deals.

PUMA, Cobra, DraftKings, Bose, Bentley, Rolex, FlightScope and JumboMax are a number of companies that DeChambeau has teamed up with during his career.

With his long list of endorsement deals and career earnings on the PGA Tour and now the breakaway LIV Golf Series, it is estimated that DeChambeau is worth approximately $14 million.