LIV Golf's Bubba Watson was previously urged to resign his PGA Tour membership ahead of the Korn Ferry Tour finals. 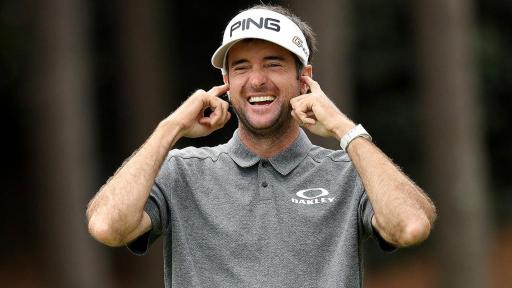 Bubba Watson was announced as a LIV Golf Invitational Series player in July.

And there was an interesting scenario regarding the two-time Masters champion.

Because he had not actually hit a tee shot in a LIV Golf event, he was still listed on the PGA Tour's FedEx Cup standings.

The other players who had played in LIV Golf events but had not resigned their memberships with the established American circuit were booted off.

Whether or not you agree with that is up to you.

But Watson's name remaining on the list by technicality had wild, wild implications for one player in particular.

His name is Chris Naegel and he's 39-year-old Monday Qualifying legend. His run this season has been nothing short of remarkable.

Check out the thread below:

This story is CRAZY. You seriously can't make it up.

I need you to read and share this post. Let's use the power of social media for good and make the PGA Tour reconsider a flaw in their FedEx Cup point system.

These 7 weeks likely earned Chris enough points as a non PGA Tour member to get into the top 200 FedEx Cup point standings and into the Korn Ferry Finals for a shot at his PGA Tour card.

...until this happened (again, you can't make this up)

1. Kim Joo-hyung, against all odds, wins the Wyndham Championship last week despite making a quad on the first hole

2. Bubba Watson, despite joining LIV, is not yet suspended by the PGA Tour because he hasn't hit a shot in competition due to injury.

How does this impact Chris?

J.H. Kim's long shot win AND Bubba still being eligible on the FedEx Cup points list bumped Naegel to spot #201. ONE. SPOT. AWAY.

Chris now won't qualify for KF Finals with a chance to earn his PGA Tour Card with a top 25 finish.

Chris Naegel is 39 years old. He has 3 kids. Been grinding on mini tours for years. Made cuts in two U.S. Opens. His 7 week run should've earned him a chance at his card.

It doesn't seem fair that Chris should miss out on a once in a lifetime chance because of a technicality. Bubba is on LIV. He's injured.

Let's see if we can get Chris an exception and get him into the Korn Ferry Finals.

Anyway, Watson has now confirmed his resignation from the PGA Tour after he was urged to make this right.

Watson, 43, has practically missed the majority of the 2022 season with a torn meniscus. Though he did hit one miracle shot at The Masters.

He will make his debut for LIV Golf in 2023, he said, and will be a team captain for the controversial series.

Watson's last win on Tour came at the 2018 Travelers Championship, which he has won three times.

He now occupies No. 90 in the OWGR, which has recently announced changes.

Watson said he and his wife "prayed" about whether or not to join LIV Golf. "My wife loved it," he said.