Presidents Cup captain Davis Love III has opened up on players' attempts to get in contact with LIV Golf's Phil Mickelson. 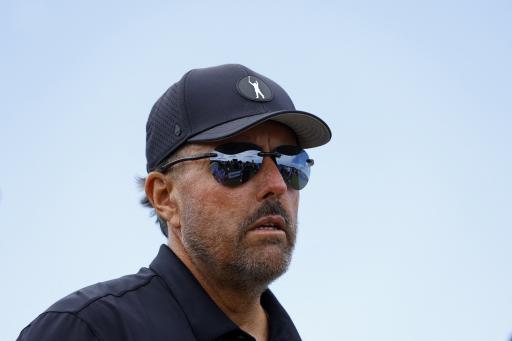 Bryson DeChambeau claimed before the 86th Masters that Phil Mickelson, the de-facto face of the LIV Golf Invitational Series had "gone dark".

"There's been no contact," DeChambeau revealed only three months after Lefty's explosive remarks about his Saudi colleagues went public.

The fallout has been so severe. Mickelson's private life, particularly his gambling problems, have been thrust into the public domain.

The human rights issues over the source of the funding of the fledgling circuit has been used as a stick to beat Mickelson repeatedly.

Whether or not you agree or care about the treatment of Mickelson is entirely subjective. But it's fair to say there has been a change in the six-time major champ.

The once exuberant American has been replaced with a character who simply refuses to offer thoughts on subjects where he once would.

He's also been a bit short-tempered in a few exchanges with reporters. Again, whether that is justified is also entirely down to your opinion.

Unsurprisingly, he is not happy. He doesn't appear too fussed about players jumping over to LIV, but taking legal action is a step too far.

He won't be picking LIV players for his team. And he's also suggested that some PGA Tour players could take the "nuclear option" in response.

Love was recently interviewed by The Firepit Collective for their Fire Drill podcast. He has offered some thoughts on the 52-year-old Mickelson.

This is what he told the podcast:

"He's had a lot of friends — like me — trying very hard to try to help him," Love said.

"Not about LIV and not about golf, but about Phil Mickelson. Right now, it's tragic that none of us can get him to take a phone call. You've heard Fred [Couples'] quotes. Hes gone dark."

He continued: "He always has challenged the rules and regulations of the PGA Tour. But the PGA Tour is what made Phil Mickelson famous.

"The system worked for him and made him famous and put him in the Hall of Fame.

"One of his really good friends said, 'Look, we've tried as hard as we can. Eventually, we have to move on."