Phil Mickelson heckled at LIV Golf event: "Do it for the Saudi Royal Family!"

Phil Mickelson was reportedly heckled by a man as he prepared to hit his tee shot at the third LIV Golf event at Trump National on Friday. 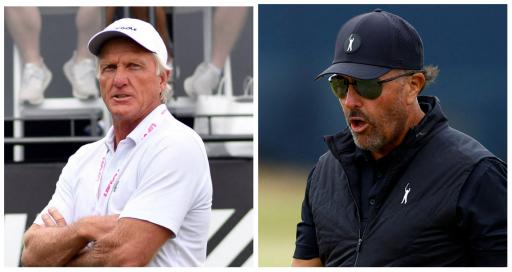 Phil Mickelson reportedly was heckled quite viciously by a man at the LIV Golf event at Trump National in Bedminster.

Lefty had just stepped onto the 16th for the shotgun start. The track "Thunderstruck" by AC/DC had just finished blaring.

Six-time major winner Mickelson was preparing to hit his tee shot at the par-3 hole in New Jersey when a man yelled: "DO IT FOR THE SAUDI ROYAL FAMILY!"

Per a report by NJ.com, there was a light grumble in the crowd and Lefty stepped away to gather himself. A security guard then warned the heckler to stop, according to witnesses.

Perhaps Lefty was a bit flustered. He smashed his tee shot into the greenside bunker then followed that up by nearly hitting his sand shot into the water on the other side of the green. He made a bogey.

Mickelson finished round one of three at the third LIV Golf event at 4-over par. It means that, astonishingly, he is now a combined 40-over par in 11 rounds of golf since returning from his self-imposed exile from the game.

He was asked by the media afterwards about the heckle.

hope it was worth it pic.twitter.com/EymGED3A6g

"I'm just a little frustrated with my game, to be honest. To three-putt the last two holes with makeable birdies, I'm just frustrated because I expect more of myself."

The location is less than 50 miles from Ground Zero. Family members of the victims and survivors of 9/11 have been protesting the LIV Golf series.

Just this week the chair of the group, Terry Strada, blasted the players who have signed up for LIV, suggesting that they were "puppets" for the Saudis.

Bubba Watson, the two-time Masters winner, was the latest signee to be announced by the circuit.

Watson said he prayed with his wife about the decision to join LIV. He is currently injured but will make his debut in September.

Henrik Stenson, who was stripped of the Ryder Cup Europe captaincy because he joined LIV, shared the lead with Patrick Reed after the first round.

The Swede and Captain America both fired rounds of 7-under 64.