Bryson DeChambeau hasn't lost any length since joining the LIV Golf Invitational Series and he showed this on the 18th hole at Rich Harvest Farms. 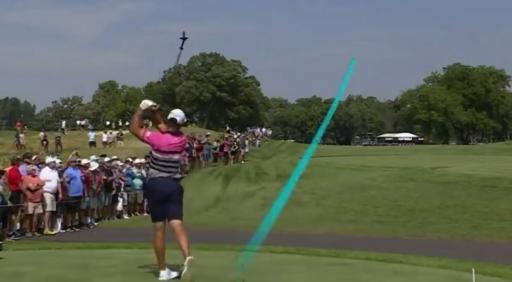 Bryson DeChambeau has fond memories of playing golf in Chicago, having won the US Amateur Championship at Olympia Fields in 2015, and he has continued this at Rich Harvest Farms this week.

During the second round of the LIV Golf Chicago Invitational, DeChambeau showed that he is still one of the biggest hitters in the game by striking a freakishly long tee shot on the 18th hole.

Watch: Bryson DeChambeau gets taken out by a rope at LIV Golf... OUCH!

With just a 6-iron in his hands, the former US Open champion hit a piercing tee shot which travelled a staggering total of 350 yards. Yes, you read that correctly.

Most professional players would have to strike their best drive out of the middle of the face to reach the 350-yard mark. DeChambeau needed just a low iron.

Unfortunately, the 28-year-old couldn't capitalise and he only made par. Nonetheless, he carded a round of 70 on Saturday to reach 5-under-par which is five shots behind new leader Cameron Smith.

Bryson just hit a 6 iron off the tee on the par 5 18th and it went 350 yards pic.twitter.com/znboyt7oJR

So far on the LIV Golf Invitational Series, DeChambeau's best result is a finish of 10th. This came on his debut appearance at the Portland Invitational at the start of July.

Ahead of the week in Chicago, DeChambeau addressed a number of different topics such as his decision to join the Saudi-backed series and its pursuit of world ranking points. He also thanked Tiger Woods for "creating" LIV Golf.

"A lot of the players are part of those discussions. That's why we've all banded together," DeChambeau said.

"I cannot speak on that, because from the player meeting we had, it was very positive, a lot of great conversations back and forth between Peter Dawson, from what I could tell, and from what LIV officials could tell me, and that's all. That's all it is.

"We're going to get to a conclusion hopefully here in the coming months in regards to how this is all going to work out. But yeah, there will be tweaks. There will be adjustments on both ends."