Phil Mickelson turned heads when he played the first round of the LIV Golf Invitational opener with a Masters logo on his gilet. 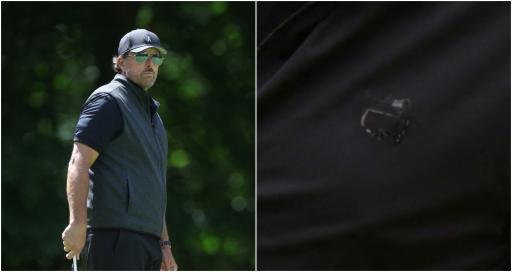 Phil Mickelson turned heads when he announced late last week he was going all-in on with the Saudis and LIV Golf.

Related: How Phil Mickelson reacted after first round at LIV Golf Invitational opener

But he turned heads again when he played his first shot at the richest tournament in the history of golf with an interesting choice of clothing.

Lefty, 51, opted to wear a black gilet with an Augusta National logo visible. The Masters emblem appeared to have also been blackened out.

It can only be described as a curious move. There is absolutely no denying that Mickelson will have intentionally done this.

He knew the eyes of the golf world were upon him when he hit that first tee shot at Centurion Club that marked a new era in golf and a career-defining chapter.

What was even more interesting is that Mickelson then changed out of that gilet.

Mickelson is a three-time winner of the Green Jacket and therefore it could be interpreted as a show of support for Augusta National or an "up yours" to the PGA Tour.

Mickelson has declined to comment on where he stands with the PGA Tour at present. He won't discuss disciplinary matters and refused to confirm if he was banned.

PGA Tour commissioner Jay Monahan dropped the ban hammer yesterday when he confirmed all of their current members who are playing LIV Golf are currently suspended.

It appears that Phil changed black vests which insinuates that he *wanted* the ANGC logo visible when he hit the first tee shot in a rebel league he apparently helped create. Which I have to say, in a week full of weird activity, is quite possibly the weirdest. pic.twitter.com/xwfKVBLTy2

Not sure if you can see it but yes, Mickelson is wearing a blacked out Augusta National Golf Club logo vest. It … looks like something maybe done with marker?

Any current members of the PGA Tour who also choose to jump ship now will also be suspended, he said.

One of the biggest questions hanging over this saga in the golf world right now is how exactly the majors will respond.

The PGA Tour does not run any of the four biggest tournaments.

The USGA has already stated that Mickelson and the PGA Tour rebels will be free to play in next week's U.S. Open at Brookline provided they have qualified.

The R&A, which runs the Open, is yet to reveal its position. It's looking likely that the US PGA and Augusta National will wait to see how things play out.

Speaking at the 86th Masters, Augusta National chairman Fred Ridley did his absolute best to avoid directly answering if LIV Golf players will be banned from playing in future Masters.

"Our mission is to always act in the best interest of the game in whatever form that may take," Ridley said. "I think that golf is in a good place right now.

"There's more participation, the purses on professional tours are they've ever been.

"We've been pretty clear in our belief that the world tours have done a great job in promoting the game over the years.

"Beyond that, there's so much that we don't know about what might happen or what could happen, I can't say much more beyond that."

Moreover, one of the biggest obstacles facing LIV Golf right now is the fact that their tournaments don't give out any world ranking points.

LIV Golf have confirmed to bunkered that they have submitted an application to OWGR.

If LIV Golf don't get the green light in that respect, then over time players will gradually slip down the rankings and won't be eligible for direct entry into the majors.

That means they will have to rely on being a previous winners - like Mickelson exemption at the Masters - to play.

However, there is precedent already set to give 54-hole tournaments OWGR points.

When tournaments are reduced to 54-holes because of bad weather, points are given.