Greg Norman to Tiger Woods and Rory McIlroy: "You should THANK me!"

LIV Golf commissioner Greg Norman says he deserves a thank you from PGA Tour's Tiger Woods and Rory McIlroy as he opened up on his critics. 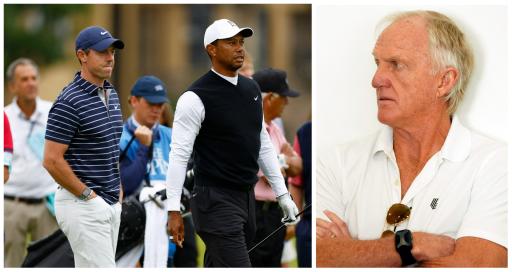 LIV Golf commissioner Greg Norman says Tiger Woods and Rory McIlroy should be thanking him as he opened up on "the flak" he has received in 2022.

Norman was speaking after it was confirmed that LIV Golf will be heading to Adelaide next April for one of their 14 events.

The Great White Shark, 67, said LIV Golf couldn't have achieved this without the likes of marquee signing Cameron Smith.

One of the biggest talking points with LIV Golf in the last few months - other than sportswashing - is whether or not the breakaway tour will be accredited by the Official World Golf Ranking.

LIV essentially tried to pull a fast one before their invitational in Jeddah by announcing a strategic alliance with the MENA Tour.

It gave LIV Golf the confidence their superstars would start getting the points they need in their 54-hole events so they could qualify for golf's four major championships.

LIV are still in the dark about this as the OWGR review their application.

Norman said he's not in direct communication with the majors over this issue but believes the comments from R&A chief executive Martin Slumbers were a "positive sign".

Two-time Open winner Norman said the majors should "stay Switzerland" and echoed the aforementioned Smith's plea for politics to remain separate when it comes to the majors.

Norman said the Masters, Open, U.S. Open and PGA of America should not take sides because they have a responsibility to their broadcasters.

Elsewhere, it's fair to say that Norman has come in for his fair share of criticism since he was announced as LIV commissioner.

Asked how he was holding up on a personal level, he said:

"Look, me myself, I'm very, very proud of what I've done. I'm proud of my team, a lot of people on this call here. There's got to be some person who's got to run through the brick wall, and you can't get bloody -- if you run through a brick wall, you're always going to get blood on you.
"To be honest with you, I'm proud of the delivery mechanism that we've put together. I'm proud of the fact that we've introduced new competition that's been desperately needed.
"I'm proud of the fact that the PGA Tour has had to react to LIV, and to see what they've done within the PGA Tour in such a short period of time is testament to what competition is all about.
"The disappointing side of the whole thing is the hypocrisy of what's been going on. That's what's been disappointing to me the most, because we have had the opportunity, we wanted the opportunity.
"We were willing to sit down in the beginning, but they made the decision to go down the path they wanted to go down, and so at the end of the day, all their narrative and banning players and saying the things they're saying about LIV, they've opened up Pandora's box from a DOJ's perspective, from an IRS's perspective, from all these institutions that are looking in now. That's because they challenged us; we didn't challenge them."

Related: How much they all won during LIV Golf's first season

Norman was once again pressed on the topic of where LIV's money is coming from.

Norman said he believes golf is getting far more attention over this aspect and complained about the hypocrisy of the PGA Tour having title sponsors that work with Saudi Arabia.

The the attention turned to McIlroy and Woods.

Norman said the PGA Tour wouldn't have increased their prize purse for their Player Impact Program [PIP] without LIV.

One of LIV Golf's most-mocked players, Pat Perez, recently lashed out at Woods for saying some of the "stupidest s***" about LIV.

Here's Norman's full quote when asked what it would mean to the Australian to see a LIV Golf player win a major in 2023:

"Look, from my perspective, I can answer this as a player, and I think it's important for the players to be able to go play as independent contractors in the majors. The majors must, must stay Switzerland.
"The majors need the strength of field. They need the best players in the business. They want the best competition for their broadcasting, for their sponsors, all the other things that come with it.
"So I do hope they stay Switzerland.
"If it is a LIV player who wins a major next year, that goes to show you how we work within the ecosystem. These players are the best. These players made a decision to come to LIV because it was a decision for them from a generational wealth opportunity to have freedom to do what they wanted to do, to give them the freedom to go play other tours without having to be restricted to one. They have choices now.
"This is the beauty of what LIV is all about, and if a LIV player goes and wins any other tournament on any other Tour, happy days. Competition is the best thing for everybody. Competition is the best thing for the PGA Tour.
"The players on the PGA Tour are the benefactors of what LIV has done being a leader on a new delivery mechanism or platform. Every PGA TOUR player should be thanking LIV, including Tiger Woods and Rory McIlroy, because the PIP program wouldn't have been increased without LIV.
"Prize money wouldn't have been increased without LIV, all these other things that have been introduced by the PGA TOUR because of LIV. Competition is the best thing in life, in business and in sport. LIV is not going to go anywhere. LIV is just going to get better and better and better, and LIV Golf has only just begun."

LIV Golf will kick off their 2023 season in February. The locations have not been confirmed but there is speculation they could begin in Florida.