Cameron Smith was "blackballed" from a number of golf clubs by the PGA Tour after he joined LIV Golf, according to reports. 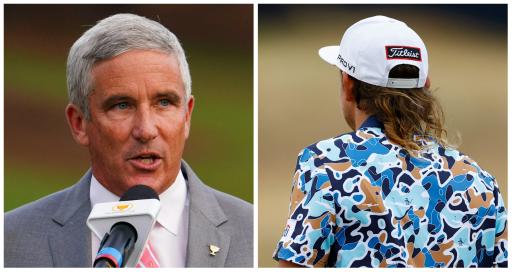 Cameron Smith was "blackballed" from a number of golf clubs by the PGA Tour after he joined LIV Golf, according to the No Laying Up podcast.

This revelation was made by Tron Carter citing "very credible sources" in a discussion about the remarkable year in professional golf and who they believe have "come out the worst".

The crazy year has seen the likes of superstar Smith join the breakaway series for a fee reportedly north of $100m shortly after the FedEx Cup playoffs.

Smith essentially confirmed he would be joining Greg Norman's enterprise after he rained on Rory McIlroy's parade at the 150th Open Championship at St. Andrews in July.

Related: How much every golfer won during LIV's first season

His defection to the Saudi-funded tour really did send shockwaves through the sport considering LIV had faced accusations that it was a destination for the ageing players cashing in on their careers.

Smith, it has to be said, was a real coup. And it would have been a bitter pill to swallow for PGA Tour chief Jay Monahan considering the sensational season the mullet-hairstyled Australian had where he rose to No. 2 in the Official World Golf Ranking.

Smith set a PGA Tour record with the lowest ever recorded score of 34-under when he won the Sentry Tournament of Champions in January.

In March he claimed The Players Championship at TPC Sawgrass with one of the most clutch up-and-downs in recent memory after finding water at the 72nd hole.

And then there was his performance in The Masters where he came unstuck at the par-3 12th like so many players before him.

Smith is such an exciting player to watch. Even Phil Mickelson was in love with his golf swing when he made an impromptu appearance in the booth during LIV's.

Of course, his decision will have not gone down well at PGA Tour HQ. It has already been reported that Smith's parking space at TPC Sawgrass was removed.

The sign that had his name was replaced with a generic one reading: "Tour players only".

NLU's Carter also claimed that Smith has been "blackballed" from these clubs:

"They've called around to every single one of these places and had him blackballed. And it's like, that's kinda f***ed up. I don't really think Cam really did anything egregious on his way out there door.
"Like, yeah, he's the reigning Players champ and that sucks that he's not going to be able defend his title and all that but the Tour doing stuff like that or doing stuff that they've been rumoured to do ... just bad business.
"Like the stuff that they're getting investigated on now [with the] antitrust [lawsuit] and the group boycott stuff. [It's like] holy s*** you guys are so sloppy and you are so poorly run and the way that your own members...their perception of you is so negative.
"I think it's ripped the band aid off of that. And I think, at the end of the day, it should be a good thing with the PGA Tour moving forward if they can wrap their arms around it and figure out how to get better for it.
"But really, overall, the amount of pettiness and just point missing by the Tour, even going back to Monahan at the Canadian Open. [He was] standing up there and looking terrible in the booth and talking about the 9/11 families. It's like, dude, this ain't it. I think between Jay Monahan and Greg Norman they both need get the f*** out of here for the sake of golf."

Carter is referring to when Monahan appeared on the PGA Tour's broadcast at the RBC Canadian Open.

McIlroy won that event and also took a shot at Norman in the process.

But Monahan was accused of trying to emotionally blackmail members of the PGA Tour, asking: "When was the last time you had to apologise for being a member of the PGA Tour?"

GolfMagic contacted the PGA Tour about these accusations but they did not respond to request for comment.