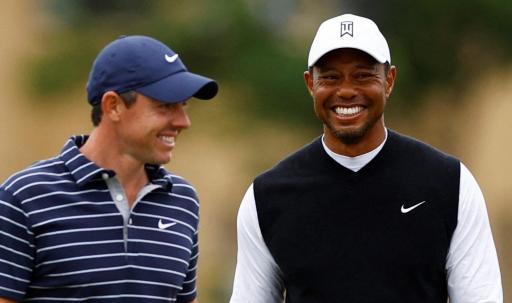 Tiger Woods has won the PGA Tour's Player Impact Program (PIP) for the second year running despite only playing nine rounds in 2022, after Rory McIlroy revealed the news to Associated Press.

Although the PGA Tour has not yet confirmed the official results for its second year of the PIP, McIlroy gave the game away to AP's Doug Ferguson earlier when confirming he finished second behind Woods.

The PGA Tour is likely to reveal the full official PIP payouts in two weeks' time.

Woods, a winner of 15 career majors and a joint record 82 victories on the PGA Tour, was only able to play nine competitive rounds in 2022 as a result of recovering from leg injuries sustained in his horror car crash of February 2021.

Woods finished 47th at The Masters, withdrew after three rounds of the US PGA Championship and then emotionally missed the cut at the Home of Golf at the 150th Open Championship.

That was Woods' last appearance on Tour, and potentially his last ever at the famous Old Course at St Andrews, the scene of two of his three Open victories in 2000 and 2005.

It is understood that Woods, who was today seen caddying for his son Charlie Woods in a junior tournament, will take up one of the three remaining spots in his annual Hero World Challenge in early December.

Woods has also confirmed he will tee it up with McIlroy against Jordan Spieth and Justin Thomas in the next edition of The Match on December 10.

There is also hope that Woods will then compete with his young cub Charlie in the annual PNC Championship where they finished second behind Team Daly in 2021.

Related: Here's all you need to know about The Match - Tiger Woods & Rory McIlroy vs Jordan Spieth & Justin Thomas

Despite losing out to Woods in the PIP race this year, McIlroy earns a nice $12 million bonus for coming second.

The prize money for the PIP this year was expanded by the PGA Tour in a bid to keep hold of its global stars and stop them from defecting to LIV Golf.

McIlroy told AP's Ferguson that he finished in the Top 10 in all but one category for the PIP.

The first was last year's system, which included the following metrics:

The second part of it then includes a new criteria that leans more on media mentions and broadcast exposure.

For 2022, the PGA Tour expanded its Player Impact Program to the Top 20 players instead of the Top 10.

It is understood that 23 players are expected to receive bonus money from the expanded $100 million total PIP purse.

McIlroy may have failed to get back on the major victory ladder in 2022, but he did land a record third FedEx Cup.

That came with a $18 million first prize.

In total, McIlroy's total earnings (including his latest PIP bonus) for the year amount to just over $40 million.

That is even more than Dustin Johnson's $35 million in tournament earnings on the Saudi-backed LIV Golf Tour this season.

Okay, DJ did pick up a huge pay packet of some $150 million just for signing up to Greg Norman's new Tour!

Woods defeated Mickelson to the PIP first prize in 2021.

That earned him a cool $8 million bonus.

Although Mickelson, who is now on LIV Golf, tweeted his followers to say he won it.

Woods therefore took great pleasure in letting Lefty know that was not the case.

Players who missed out on the Top 10 in 2021 such as Collin Morikawa and Patrick Cantlay have since spoken out about the Player Impact Program.

As you can see from the above list, five of last year's Top 10 in the PGA Tour's PIP now play on the LIV Golf Tour (Mickelson, Johnson, DeChambeau, Koepka and Watson).

With the PGA Tour having suspended all members who have played in LIV Golf tournaments, those five players will not be featured in the 2022 list when the results are revealed before the end of November.

Looking ahead to 2023 and the PGA Tour has confirmed the Top 20 players will receive their PIP bonus once they have competed in the 13 Elevated Events for which they are eligible, and three non-Elevated tournaments.

There will be an exception for Woods, according to AP's Ferguson:

"PGA Tour commissioner Jay Monahan has discretion to award PIP money to those who do not meet the tournament minimum because of serious injury or other emergency."

What do you make of Woods winning the PIP again in 2022? Surely he cannot possibly win it again in 2023?! Share your thoughts and comments over on the GolfMagic social media channels.

Next Page: LIV Golf commentator says he "dreads the fact they are going to be on TV"