GolfMagic decided to take a look at five players Greg Norman would love to sign for LIV Golf as the controversial series gathers steam and credibility. 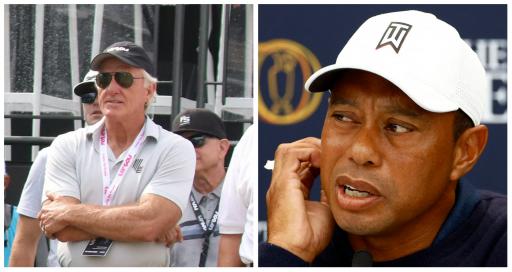 It looks more than likely the controversial LIV Golf series is here to stay, much to the dismay of players like Rory McIlroy and Tiger Woods.

Northern Irishman McIlroy, 33, previously said he would be "super happy" if LIV didn't exist because he feels like it is fracturing the game.

Woods claimed that he didn't understand where the incentive was, particularly for the younger guys, to play in the Saudi-backed series.

In response to these comments, Bryson DeChambeau has vowed to "work even harder" to justify his LIV price tag.

At the time of writing, it's fair to say that LIV Golf have been surprised by the number of big name players who have made the jump.

Many of which don't seem all too fussed about whether they will be able to participate in future Ryder Cups, Presidents Cups or even majors.

The PGA Tour created the Player Impact Program (PIP) when talk of the series was all just smoke and mirrors last season.

That was seen as an attempt to keep the elite players in the game happy. It was viewed, essentially, as a sort of slush fund for the cream of the crop.

It came as no surprise that Woods, 46, scooped the $8million top prize for being the biggest needle mover in the sport.

But LIV now have a bunch of guys that finished inside the top-10 of the PIP, which will serve as a warning to the PGA Tour.

Phil Mickelson, who finished second behind Woods in the PIP, is now a LIV player.

DeChambeau, Dustin Johnson and Brooks Koepka also finished inside the top-10 of the PIP, earning cash for their influence on the sport.

Bubba Watson is widely-assumed to be joining too. If the two-time Masters champion makes the leap to LIV, it would mean that Norman has scooped five players from the top-10 of the inaugural PIP.

The issue of what will become of the LIV players will sort itself out over time. Probably in court.

But for now though, the PGA Tour will be braced for future defections to the Greg Norman-led league.

Just this week Norman stated that LIV are now turning away players due to the fact their roster for the 2024 $405million season is filling up.

However, there is no denying that there are some players Norman desperately wants to add to their ranks.

GolfMagic decided to take a peek at five of the biggest names Norman desperately wants to sign for LIV.

Woods reportedly turned down nearly $1billion to sign for LIV Golf. Whether that's true is very much up for debate. But if we're being a little bit cynical here, Woods' comments about LIV could be construed in a different way.

He previously suggested that there was no incentive in LIV because there was guaranteed prize money and no world ranking points, thus forming no path to the majors. But if that were to change?

McIlroy has been quoted as saying although his opinion on LIV hasn't changed, his view over the source of the money has softened.

The Ulsterman has spoken of Saudi money being involved in the ladies' game, such as the sponsorship of the ARAMCO events on the Ladies European Tour.

There is no denying that that money has been crucial. McIlroy has previously spoken of the established tours working together more to benefit the game of golf.

He has also been quoted as saying that if the Saudis were truly interested in "growing the game" and investing money responsibly then he wouldn't have the issue he does now.

Whilst the 29-year-old has been far from his best in recent years, struggling to capture the form that saw him claim three majors, he is still a massive draw in golf. He is hugely popular wherever he goes. People tune into the PGA Tour specifically to watch Spieth.

We've seen so many ridiculous shots from Spieth in his career. "Jordan Spieth doing Jordan Spieth things" has become a catchphrase.

His team are surely, surely in intense negotiations with LIV. His signature would be an absolutely remarkable coup for Norman.

Globally, it would have a huge impact. The 25-year-old is said to be the primary target of LIV and they allegedly want him to captain an "all-Australian" side comprising of Adam Scott and Marc Leishman.

Again, Matsuyama's signature would be astonishing. The 2021 Masters winner is a huge name in his homeland.

The Public Investment Fund are also funnelling money into the Asian Tour with an International Series.

Matsuyama would be key to this. He is reportedly mulling over an offer of $400million.

Growing golf in Asia would be key for LIV's legitimacy.

What do you think? Is LIV Golf a flash in the pan? Is it here to stay? Does it bother you?

Let us know on our social media channels.

Next page: Tiger Woods didn't speak to Bryson after he joined LIV