The much-anticipated LIV Golf Invitational Series is finally upon us and Alex from GolfMagic had a long walk around Centurion Golf Club on day one. 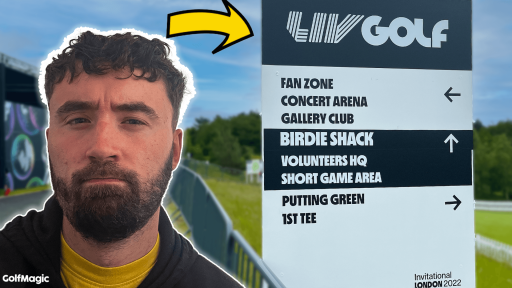 You would think that once the first event of the LIV Golf Invitational Series began, the talking would stop and the golf would begin, but the complete opposite has happened.

Alex from GolfMagic attended the inaugural event at Centurion Golf Club to see what the fuss is all about, taking a walk around the grounds in St. Albans.

Alex commented on how easy it was to enter the course through the park and ride system. Once you walk into the venue, you have instant access to the players on the putting green and the driving range.

LIV Golf and "Don't Blink" was pasted all around the course. Music was booming on the driving range and the players looked very relaxed and jovial. It was a communal and enjoyable atmosphere.

The fan zone was busy with the Mega Putt, the Chipping Challenge and the performance zone. The first day of the tournament felt like a pro-am day.

The fan zone felt like a festival with a number of headline acts such as Jessie J, Craig David and James Morrison performing on respective evenings throughout the week.

At 2.45 pm, the PGA Tour announced that the players who have chosen to join the LIV Golf Series have been suspended and removed from the FedEx Cup rankings.

Alex found the day's golf a bit boring. It felt like an exhibition with nothing at stake which is essentially the issue with the LIV Golf Invitational Series.

As the players have been paid ridiculous amounts of money, there is less competitive incentive than a PGA Tour event or a major championship.

The money incentive has already been established with each player. Phil Mickelson and Dustin Johnson have reportedly been paid nine-figure sums. If it is a carefree exhibition event, then why should fans care?

Alex pointed out the lack of interactive scoreboards on the course, which isn't beneficial for on-course fans. However, the production of the event is impressive and you will have an enjoyable day as a spectator.

Alex outlines the risk of financial incentives diluting the competitive edge and the actual glory of winning a professional golf tournament.

Next Page: LIV GOLF: Why Greg Norman had "hate in his eyes" in this photograph...