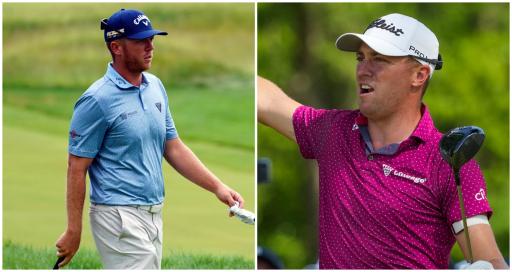 Gooch was being interviewed on the green at Pumpkin Ridge Golf Club in Portland, Oregon, alongside his “4 Aces GC” teammates Pat Perez, Patrick Reed and Dustin Johnson when he made the comments.

“I haven’t played a Ryder Cup or Presidents Cup, but I can’t imagine there’s a whole hell of a lot of difference,” Gooch said in a post-match interview. “This was as cool as it gets. We’ve been saying it all week. The energy is just different, it’s awesome.”

As he was doing so, Johnson, 37, turned away and appeared to smirk. Likewise, Captain America, who was drenched in champagne.

Was this an epic troll or was Gooch being serious?

It’s hard to tell with Gooch. He’s had an interesting time since he decided to join LIV Golf.

First, he claimed to being too stupid to not know what sportswashing was. “I’m not that smart,” he told reporters in awkward exchange at Centurion Club just outside of London a few weeks ago.

Thomas, 29, who has been part of two Ryder Cups and two Presidents Cups, reacted by posting on Instagram to Gooch’s comments: “I’ve seen some funny stuff online, but this is one of the better ones.”

The 15-time PGA Tour winner also told Golf Channel yesterday after playing in the JP McManus Pro-AM at Adare Manor: “I’m just blown away by what today is and what this weekend and week has been.

“It’s going to be impeccable. The golf course is beautiful, seems like it’s great for spectators. I mean, it feels pretty close to a Ryder Cup today."

Thomas has had plenty to say in recent weeks and months about LIV Golf. So much so that he has admitted to losing sleep over the developments.

Last week he told the No Laying Up podcast he just wished some of the LIV players would “have the balls to admit it’s about the money”.

He added that hearing the LIV players say they have jumped ship “for the betterment” of the game agitates him.

Yesterday, LIV Golf player Ian Poulter and two others were granted a stay in proceedings over the sanctions imposed upon them by the DP World Tour.

It means that the Englishman will be allowed to play in the Genesis Scottish Open.

Next page: Why Jordan Spieth was DQ'd from Pro-AM