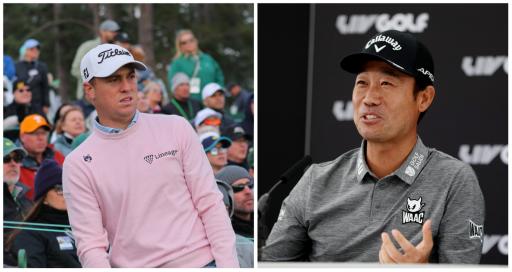 Thomas has been in fine form on social media of late.

When Collin Morikawa took to the platform to confirm that he was staying on the PGA Tour and not defecting to the riches of LIV Golf he did so with a strange and revealing remark.

Morikawa confirmed that he in fact puts milk into his cereal bowl first.

What kind of insanity is that?!

Thomas replied: “You going milk first is more of a concern than you going anywhere…”

And now 28-year-old Thomas has given us another one-line zinger.

To which Thomas replied:

Well, it’s gonna be hard for Kevin to run away from me on this particular list

Thomas was also surprised by In Gee Chun, who raced into the lead at the Women’s PGA Championship with one of the most incredible first rounds in a major in recent times.

Read more about his reaction here.

Thomas is currently injured. He withdrew from the Travelers Championship at TPC River Highlands after tweaking his back but was quick to stop the rumour mill from going into overdrive by confirming he wasn’t going to LIV Golf.

The latest news in the LIV Golf versus PGA Tour drama is that the DP World Tour have announced that the rebels who played in the inaugural event at Centurion Club have been fined £100,000 and have been banned from competing in the Scottish Open, Barbasol Championship and Barracuda Championship.

Next page: McIlroy is our "Harvey Dent" and I feel bad for him, says Homa