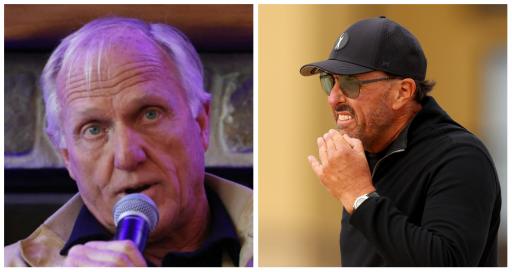 Greg Norman had absolutely no idea what Phil Mickelson's famous "FIGJAM" nick name meant when he recently took part in a promotional video for the all-Australian LIV Golf side Punch GC featuring Cameron Smith where they reacted to mean social media messages.

In case you too are also blissfully unaware, Mickelson courted the nick name back in his heyday. It is an acronym with obscene language: "F*** I'm good, just ask me."

Mickelson is - or was - before he went into hiding following the fall out from when his controversial remarks were published - a self-confessed smart aleck.

Over the years, we have heard some wild stories about Lefty. Mickelson, it appears, has enjoyed being the centre of attention and showing off with his golf skills, stories and knowledge.

Apparently, this nick name was given to Mickelson by PGA Tour players in the 90s.

I mean, everyone has haters.

It should be noted that Mickelson is more commonly known as Lefty or Phil the Thrill.

Or something worse if you're Tiger Woods' mother Tida.

We appeared to have a re-emergence of the Mickelson of old at the last LIV event with this insane shot.

But back to the topic at hand and Norman is joined by Smith, Marc Leishman, Matt Jones and Wade Ormsby to read out some nasty messages.

One tweet that was sent in read: "I might be mad but I think Greg Norman may be the biggest FIGJAM in the world. Just saying like..."

Other topics included Smith's moustache, how Australians are reportedly sore losers and some questionable outfit choices.

Is Greg Norman a FIGJAM? pic.twitter.com/Fu8m93WGZm

And the full video, which you can watch here.

It reminded us of a GolfMagic classic where PGA Tour player Rickie Fowler also did the same.

LIV Golf will play their sixth event of their inaugural season in Bangkok over October 7-9. The field will be headlined by the likes of the aforementioned Smith and Mickelson, Dustin Johnson and Bryson DeChambeau.

Next page: Norman admits working with LPGA "forefront of my mind"