Lehman: Phil Mickelson was gambling (in the woods) during Presidents Cup

An extract from a new book about Phil Mickelson reveals extent of Lefty's alleged gambling even during the 2000 Presidents Cup. 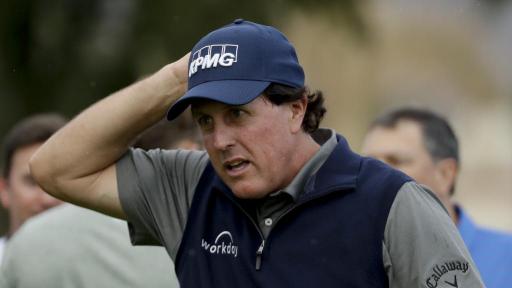 The extent of Phil Mickelson's alleged gambling was revealed a few weeks ago by the golf writer Alan Shipnuck.

It was the same writer who published the controversial and in Lefty's own words "reckless" remarks that led to his exile from the game.

Just where has Mickelson been is a question that golf fans continue to ask. When and if he will return are other considerations.

Has he played his last ever PGA Tour event? Will we now only see him at the majors and in the Saudi-backed breakaway league?

Is this truly how the curtain falls on the career of a 45-time PGA Tour winner?

Last week, there was a bit of activity on Mickelson's Twitter account for the first time since late February when he departed the golf world.

Mickelson's account "liked" a comment that seemed to suggest he was unhappy with being cancelled. It was hastily un-liked.

The context of that was the NBA agreeing to host games in the United Arab Emirates.

Shipnuck's book is released this week. After Greg Norman's comments last week, it probably wasn't the best time for Mickelson to return.

Especially, if we are to believe that he was absolutely devastated by the fallout from what he said all those months ago to Shipnuck.

Norman said "everybody makes mistakes" when asked about the murder of the journalist Jamal Khashoggi.

Khashoggi's fiancée described those comments as "so hurtful". Norman's PR tried to limit the damage of the gaffe.

According to Shipnuck, Mickelson once racked up a debt to the tune of a shocking $40million.

Ahead of the release of the book, Shipnuck has let The Times of London publish an extract which explains how gambling affected Lefty.

The article outlines how Lefty was "more concerned" with checking the football scores and "covering the spread", even during tournaments.

Steve Flesch, who was paired with Mickelson on a Sunday during the Hyundai Team Matches, told Shipnuck that every hole Mickelson "was checking like a beeper or something."

"He could not have cared any less about what we were doing on the golf course. He was definitely more concerned about who was winning the football games and who was covering the spread."

Elsewhere, five-time PGA Tour winner Tom Lehman told the author that he had a similar experience with Mickelson during the Presidents Cup in 2000.

The United States ended up thrashing the International team that year, but it appears that's not what Lehman, 63, remembers it for.

Lehman was paired with Lefty and they were playing Mike Weir and Steve Elkington.

"On the ninth hole he buries it in the front bunker and is out of the hole again. He walks way back into the trees and is sitting on a stump with his back to everybody and his head down.

"I think he's giving himself a pep talk, so I go over there to try to make him feel better and he's got his phone out and he's checking the football scores."