Buffalo Bills quarterback Josh Allen decided to also mock Bryson DeChambeau's LIV Golf rope moment but you may have missed this on first viewing the clip. 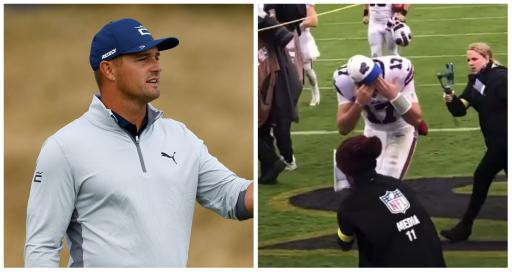 Bryson DeChambeau's gallery rope videos were once again touched upon over the weekend and this time it came from the Buffalo Bills' quarterback Josh Allen after their NFL game against the Baltimore Ravens.

Allen, when he's not playing American football, can often be found on the fairways. He's a huge golf fan and he recently took part in the most recent edition of The Match alongside Tom Brady, Patrick Mahomes and Aaron Rodgers.

So it's absolutely no surprise that he saw DeChambeau's epic battle which was later given the WWE treatment.

Here's the clip of Allen:

Just superb. Credit for Allen for his quick-thinking to do this.

Can we also just pause briefly and appreciate that the chap who lifts up the rope for Allen ends up almost decapitating the fella in the blue jacket:

All these ropes man!

I think we've all had our fill now. Can we just stop. Enough!

DeChambeau will be back in action this week for LIV Golf, playing in Bangkok for their sixth event of their inaugural season.

After almost pulling off an almighty upset in Las Vegas last week at the Pro Long Driver's World Championship, DeChambeau released a statement which appeared to address some of his LIV critics.

"I hope everyone gets a chance to fairly see who I am one day," he said.