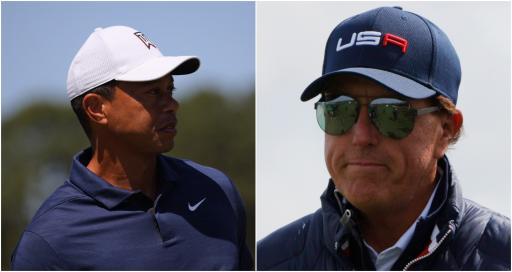 When it comes to golf's greatest professional rivalries you can perhaps look no further than Tiger Woods and Phil Mickelson.

Over the years, the two players have provided for some incredible moments. In public, they have brushed off that they have ever feuded.

But privately, it appears that at one point in time the two really did not like each other very much at all. Who knows if they speak these days.

It's no surprise. Both players could be forgiven for thinking they would have won even more tournaments had the other not existed.

That being said, they both brought out the best in each other. During Woods' era of dominance, he was known for winning at all costs.

At the height of his rivalry with Sergio Garcia, Woods reportedly told a friend he "bludgeoned Tweety bird" after getting the better of the Spaniard.

That was after Woods managed to claim the 2006 Open when Garcia was decked out in an all-yellow outfit, resembling the character Looney Tunes.

According to an extract from Alan Shipnuck's forthcoming book about Mickelson, he claims Woods' mother Tida had some unflattering nicknames for the left-hander.

They were "Hefty" and "the fat boy", according to the article that was published in The Times of London.

The article goes further in explaining the four things Woods would always do to try and put Mickelson off his stride if they were paired together.

Those four things come courtesy of Butch Harmon, who reportedly told Mickelson what they were after Woods split with his first coach.

Harmon reportedly told Mickelson: "He's been doing it to you his whole career and you don't even know it."

1. Woods always tried to putt-out first so the crowd would be moving to the next tee while Mickelson was putting.

2. He would linger behind the green and let Phil walk up to the tee box first, so when Tiger arrived, his playing partner would have to listen to the roar.

3. On holes when he [Mickelson] was between 3-wood or driver, Woods would choose less club so he could fart around in the fairway and make Mickelson watch him hit what would inevitably be a laser-like approach.

4. If Phil was amped up and moving fast, Tiger would slow his walk and pace of play; if Mickelson had a more leisurely vibe, Woods sped up his gait and routine. Either way, the goal was to try to upset his adversary’s rhythm.

More: Tiger Woods reveals how miserable his post-Masters Monday was