LIV Golf Tour chief executive Greg Norman has explained his current position on his attempts to engage with the LPGA Tour. 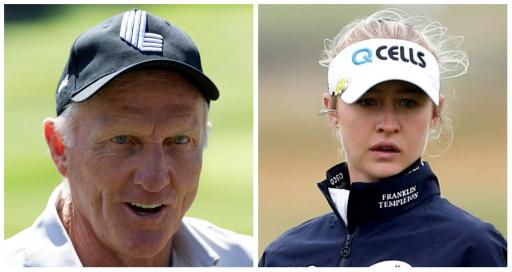 LIV Golf Tour chief executive Greg Norman says working with the women's game is "at the forefront of my mind" but appeared to pour cold water on the potential of striking a deal with the LPGA anytime soon.

Speaking ahead of LIV Golf Bangkok, where the controversial series will debut in Asia at Stonehill over October 7-9, Norman - who once again criticised Rory McIlroy last week - said that he believes the value of LPGA players has risen recently.

Norman previously suggested that LIV had reached out to the LPGA Tour many months ago. This was flat out denied by LPGA Tour commissioner Mollie Marcoux. However, she then told Golfweek's Beth Ann Nichols that she would engage in a conversation with Norman.

"It's my responsibility to evaluate every opportunity," she previously told the publication.

"I would engage in a conversation if it would achieve our aim of promoting women's golf, but there needs to be input from players and sponsors. There's a lot of factors to consider before we do business with."

LIV Golf players have been facing accusations that they are complicit in Saudi Arabia's attempts to soften their image globally through sport in a practice known as sportswashing.

If the LPGA Tour were to work with LIV Golf, it would seem at odds with how the kingdom treats women.

However, 20-time LPGA Tour winner Christie Kerr was quoted saying "almost the entire [LPGA] tour" would make the jump to LIV Golf if they were put in a similar position to the men's game because of the vast differences in prize purses on offer.

Norman told the Herald and The Age: "That's always been in the forefront of my mind [working with the women's game] to be honest with you because I have been a staunch proponent of them.

"I've played with a lot of LPGA players over the years and I think their value has risen recently, there's no question about it. If there's an opportunity for us to have an open conversation and dialogue with women, I’m very much at the forefront of that.

"Right now to be honest with you, I'm completely locked and loaded with what we're doing because we're launching the [men's] league in 2023, and we've got a lot of work to do to get that up and running."