Richard Bland claims DP World Tour chief executive Keith Pelley made a stunning admission when he told him he was playing the first LIV Golf event. 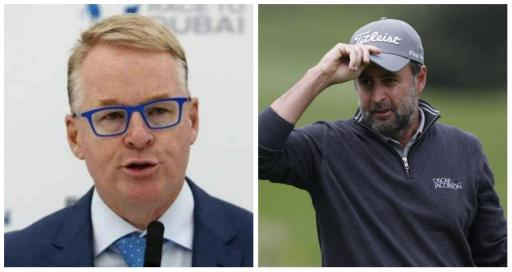 Bland, 49, was one of the first players to confirm his intentions of playing in the controversial series, where the battle for the future of professional golf finally made its way to the court room for the first time this week.

Before the British Masters, Bland confirmed he had requested a waiver from the DP World Tour so he could play in the curtain-raising event for LIV Golf at Centurion Club just outside of London.

Bland, justifying his decision to join LIV, said he had an opportunity to make "the next stage of my life extremely comfortable".

The waiver request was, as we know, denied and he was one of a number of players who were fined £100,000.

LIV Golf, backed by Saudi Arabia's Public Investment Fund, have reportedly covered the cost of the fines handed out by the DP World Tour and PGA Tour.

Bland recently joined former pro footballer Matt Lee Tissier on a podcast and he made a stunning revelation with regards to Pelley.

"When we played at Centurion, we certainly didn't know what was going on," he said.

"I had two or three meetings with Keith Pelley, our CEO, and he said to me – we were at The Belfry, at the British Masters, and he said: 'If I was in your position I'd do exactly the same as you're going to do.'"

He added: "I basically told him [Pelley] what I was going to do and I've been fairly upfront about the reasons I've done it and it purely is for the money. I'm not ashamed to say that. Who wouldn't at my age?"

His alleged comments clearly are surprising given what he has said publicly.

Pelley, announcing players were being fined £100,000 and banned from the co-sanctioned Genesis Scottish Open, Barbasol Championship and Barracuda Championship, said every action anyone takes in life "comes with a consequence".

He continued: "And it is no different in professional sport, especially if a person chooses to break the rules. That is what has occurred here with several of our members.

The Englishman is competing in the ISPS Handa World Invitational in Northern Ireland on the DP World Tour this week and he started brightly with a round of 5-under 65.

Next page: LIV Golf boss says there is "misunderstanding" over contracts