Louis Oosthuizen, who plays in LIV Golf events, has opened up on his decision to join the fledgling circuit as he claimed there is "no need for animosity". 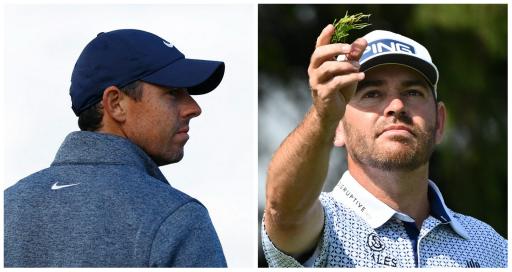 Louis Oosthuizen has echoed the sentiments of Rory McIlroy over LIV Golf's future as he claimed Greg Norman's league "isn't going anywhere" and there is "no need for animosity".

In a report by James Corrigan of The Telegraph, the 2010 Open winner has revealed his thought process before joining the LIV Golf Invitational Series.

According to Oosthuizen, he was on the fence about it all as he planned on winding down his career before the huge offer from LIV was tabled. He said he had always planned to be done "with the grind" of playing a full schedule when he turned 40.

He's now 39 and has played in every single LIV Golf tournament in their inaugural eight-event $255m season, which Bryson DeChambeau has described as a "beta test".

After LIV Golf Chicago, Oosthuizen's on-course earnings for the controversial series reached $4,114,167. He plays in the all-South African team, Stinger GC, comprising of Charl Schwartzel, Branden Grace and Shaun Norris. Hennie du Plessis was previously part of the side.

It has been reported that Oosthuizen's up-front fee for joining Norman et-al was as much as $40m.

Going forward, he believes that there simply will have to be some peace talks between the warring parties after the "lawyers do their thing".

Oosthuizen backed up what Rory McIlroy previously claimed before the Alfred Dunhill Links Championship on the DP World Tour, a tournament the South African made the cut in despite the horrific weather.

He also went as far as claiming that he would be interested in playing in future DP World Tour events as he explained that before he joined LIV he spoke to PGA Tour commissioner Jay Monahan and Keith Pelley, the chief executive of the European circuit.

What is the OWGR's final decision going to be on LIV Golf tournaments?

"I chatted to them [Monahan and Pelley] and explained my position and said it was nothing at all to do with their product or how I'd been treated or anything. But I'm turning 40 in a few weeks, was only maybe going to have another year on the grind of tours and, honestly, I was completely done with playing a full schedule.

"Initially I wasn't sure, but I sat down with my wife [Nel Mare] and when we looked it just all fitted together. We'd moved into the ranch in spring - we were brought up around farms and it was always our aim to have our own - and thought 'Why not? Let's go for it - this is right for us.'

"People might wonder 'well, you finished runner-up in two majors last year, with four top threes in two years' and say 'you're so close to to getting a second' and it did give me another burst, another lease of my sporting life. And I won't retire, full-stop, I'll just play less."

He added: "The thing is it was never the plan to keep going and going, there are other things I want to do with my life. Golf is brilliant in that it gives you these options to continue as a pro, but there is a danger that it just decides for you what's next and for me I didn't want just to stay on that path of playing all the time.

"With its 14 events and maybe one or two extra here and there - including of course the Open - LIV gives me that chance for the next few years. Maybe I would join the European Tour again, as you only need to play four events or so. Things need to happen for that to be possible."

Related: Former PGA Tour caddie to LIV players: "Be mad at your agent!"

He added: "I saw what Rory [McIlroy] said here earlier this week about the game ripping itself apart and the need for the guys in all camps to get together and talk and figure something out and, in truth, I’ve always thought that's inevitable eventually.

Related: 9 players who changed their mind about LIV Golf

"LIV isn't going anywhere and, of course, neither are the Tours and after the lawyers do their thing, it will come to a point when they will all get around a table and find a solution. I'm not sure where I'll be in my career by then, but it needs to happen.

"There is no need for any animosity. I've encountered none here this week and that's the way it should be."