LIV Golf player Eugenio Lopez-Chacarra has revealed Ryder Cup Europe captain Luke Donald reached out to him with a series of text messages. 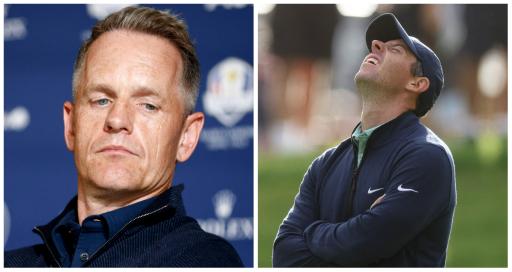 In an interview for Spanish newspaper Marca, the 22-year-old youngster claimed that the "scuffling" between the PGA Tour and the Saudi-financed series "is really not that bad".

Spain's Lopez-Chaccara believes the situation is a "managerial matter" and once the head-scratching problem regarding world-ranking points is resolved then there will have to be a compromise.

He spoke of his "dream" year that was highlighted by claiming his maiden professional victory at LIV Golf's Invitational in Bangkok.

The 22-year-old also spoke of his career aspirations. Understandably, he wants to compete in the major championships.

He said it was his dream to slip on the coveted green jacket. He hopes to peg it up at 2023 Open and U.S. Open, as well.

The governing bodies overseeing the four major championships haven't revealed their full hand as to how they will deal with LIV players just yet.

R&A chief executive executive Martin Slumbers said it would go against the nature of the major to ban players. Yet Augusta National, the PGA of America and USGA have remained curiously silent.

Lopez-Chacarra said he also aspires to play in the Ryder Cup. That's one of his longer-term goals. There is no doubting he possesses the talent to compete in one edition.

He also revealed captain Donald has reached out to him:

"Luke Donald sent me a couple of messages and it is always an honour that someone like him, who is the captain of the Ryder, thinks of you and follows you. I have always wanted to play the Ryder Cup and it is one of my long-term goals. I have to keep working and wait for everything to return to normal."

When these messages were sent has peaked our interest at GolfMagic.

Donald's Ryder Cup plans are largely up in the air as he awaits a court hearing in February that will determine whether or not the DP World Tour has the legal power to ban players who are playing in LIV tournaments.

Ryder Cup Europe have changed the qualifying process for Donald's 12-man team. The Englishman will have six captain's picks.

Qualifying for Team Europe began at the BMW PGA Championship at Wentworth - won by Shane Lowry - and will end 3 September 2023 before the Ryder Cup on 25 September.

Of the disruption caused by the emergence of LIV, Donald said in early October:

"I really don't know what my team is going to look like. But I know, I'm assuming there will be some established players and some guys that are hungry, new, young players that want to make this team.
"So we are excited to be here and have that home advantage but again, it's a little bit early to know what that makeup of the team will be like."

It would be interesting to hear what exactly Donald allegedly said to Lopez-Chacarra.

Earlier in the month LIV Golf superstar Cameron Smith revealed Rory McIlroy had sent him text messages as well, imploring him to thoroughly think over his decision before joining the controversial series.