LIV Golf player Eugenio Lopez-Chacarra has opened up on a "dream year" with the controversial tour as he predicted the PGA Tour will have to compromise. 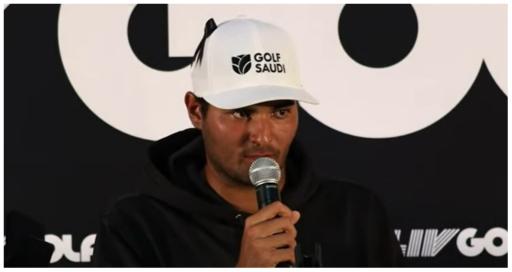 Eugenio Lopez-Chacarra says the "scuffling" between the warring LIV Golf and PGA Tour is not as bad as it seems as he claimed "they will have to reach an agreement".

Lopez-Chacarra was the world No.2 ranked amateur when he signed for LIV Golf earlier in the year.

His signature would have sent alarm bells ringing at PGA Tour HQ as for the most part the breakaway tour had snapped up the players who - it's fair to say - have had their time in the sun.

But Lopez-Chacarra is a star of tomorrow. He is a major winner in the making. Jon Rahm has spoken highly of the 22-year-old and event reached out to his fellow Spaniard when he claimed his maiden professional victory at LIV Golf's Invitational in Bangkok.

It banked the youngster a cool $4m. He has reportedly signed a three-year deal with the tour commissioned by the divisive Greg Norman.

Now Lopez-Chacarra has given a wide-ranging interview to Spanish newspaper Marca, which you can read here.

Lopez-Chacarra spoke of what a "dream year" it has been for him personally after he made the choice not to play on the PGA Tour.

Of the drama, he said:

"There is a lot of scuffling and there is a lot of talk and it seems that everything is worse than it is. It is a managerial matter. Seeing the names that are already competing in the LIV and those that will come next year, they will have to reach an agreement.
"Everyone wants to play against the best and that's why I decided to go to the LIV, which is where more top golfers play every week. With the new signings and the new calendar, I think an agreement will have to be reached.
"As Jon [Rahm] has said many times, we all want to play against the best and that's why you have to compromise; it is good for sport. A Ryder without Sergio [García], without Lee Westwood, without Byrson [DeChambeau] and without the new young promises, I don't think it would be the same."

Lopez-Chacarra signed for the LIV Golf League in June. His deal is reportedly worth between $8-10m over three years, but that is unsubstantiated.

He previously did admit that the contract gives him "peace of mind".

He continued on this topic:

"My situation is different from that of almost everyone in the LIV, because I have never earned money from any other circuit. I have a contract with LIV and I am very happy where I am. I think it is the future of golf.
"And the world ranking issue I do think is the key, because if they give us points more players will want to come and in the end the circuits will have to reach an agreement. I think it will end up happening.
"We have already seen Rory [McIlroy] and Rahm asking for solutions and the managers are going to have to sit down and talk and put aside that fight of egos. But my case is different and I'm not so worried. For the good of golf it has to be resolved."

Related: How much they all won at LIV Golf Bangkok

"Although some people want to make us look at them [LIV Golf] as the enemy, he is just a 22 years old guy winning against some of the best players of the world. Congratulations if you see this Eugenio."

"Jon is a great person as well as a great golfer. Our relationship is perfect, we write some messages. What he does for Spanish golf is unique and we owe him a lot. He is a reference for me and one of the best or the best in the world. I thank you very much for those words that he said about me."

Lopez-Chaccara also predicted that he believes LIV Golf will eventually hold an event in Spain.

In 2023 he said he hopes to be contending at the majors. He would like to slip on the green jacket in his career, though that is hardly a surprising statement.

Next page: How much every LIV Golf player won in 2022