Phil Mickelson did not appear too pleased with his position as LIV Golf named a starting XI in honour of the 2022 Fifa World Cup in Qatar. 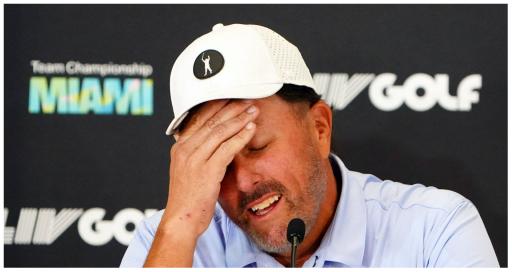 The controversial series threw up a post on social media, asking their followers to vote for who would make it into the starting 11 players in honour of the 2022 Fifa World Cup.

Much of the coverage so far of the World Cup has focused in the off-field politics over Qatar's human rights abuses and their treatment of the LBGT community.

But back to the topic at hand and it seems Lefty is not too happy with his position, occupying the central midfield role.

Marc Leishman - who hit the headlines this week over his comments about not playing in any more majors - is in goal.

At the back we have Bryson DeChambeau, Brooks Koepka, Henrik Stenson and Martin Kaymer.

Paul Casey and Cameron Smith - who dedicated his Aussie PGA Championship win to his ill grandmother - are on the wings.

And it appears that Mickelson will have to be in the engine room alongside Joaquin Niemann.

TAKE A LOOK AT THE XI HERE:

The LIV Golf Starting XI as voted by you. Comment below with your first group of subs#LIVGolf #worldcup #worldcup2022 pic.twitter.com/2TXaqpIti1

It made us wonder at GolfMagic just what someone like Roy Keane would make of a performance from Lefty if he didn't pull his weight.

"I am SICK to death of Phil Mickelson, I would be FIGHTING him at half-time. There is NO getting away from that. I would be SWINGING punches at that guy. I am FLABBERGASTED."

Mickelson has remained largely silent on social media since his return to the golf world with LIV. His Twitter account has liked a few posts here and there - largely about him "being right" about some of the issues he has highlighted in his war of words with the PGA Tour.

In other Mickelson news, he has joined Tiger Woods in auctioning off some memorabilia.

Lefty has put up one of his Scotty Cameron putters up for sale, but it's unlikely to fetch the sum of money spent on Woods' irons he used during the Tiger slam era.

Also, a federal judge has ruled that Mickelson is still the subject of discovery in the antitrust lawsuit against the PGA Tour, meaning that he can still be deposed.

Next page: Phil Mickelson gets the boot from The Match