According to the New Yorker, Max Homa ignored contact from the LIV Golf Tour in order to avoid the temptation to join the controversial new series. 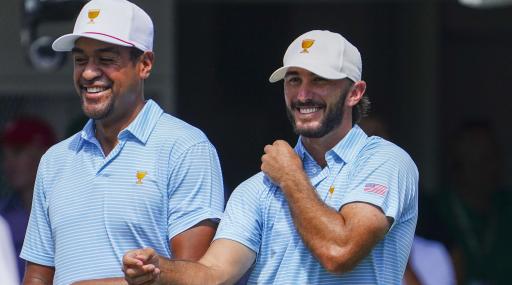 PGA Tour star Max Homa used a specific tactic to avoid being lured by the LIV Golf Tour and the millions of dollars pumped in by the Public Investment Fund of Saudi Arabia.

As reported by Zach Helfand of the New Yorker, Homa said his strategy was to avoid correspondence with LIV at all costs, otherwise, he could read a figure that was too much to turn down.

Phil Mickelson was reportedly given $200 million to join the Saudi-backed series, while the likes of Cameron Smith, Dustin Johnson and Bryson DeChambeau were also given nine-figure fees.

Homa has become of the world's top players in the last 12 months. He won his fifth PGA Tour title at the Fortinet Championship in September and he made an impressive debut for America at the Presidents Cup.

The 31-year-old joined the Player Advisory Council on the PGA Tour in August after Brooks Koepka, Graeme McDowell and Paul Casey stepped down from their roles upon joining LIV.

He is a strong Tour loyalist who jokingly renamed the Saudi-backed series the 'LIT Tour' and back in June, Homa described how negotiations with players and LIV Golf come to fruition.

Homa imagined the exact negotiations that he actively avoided. He is one of the 15 players from the top 20 in the world who are teeing it up in the CJ Cup this week.

Helfand also reported a number of significant stories such as Majed Al Sorour, the chief executive of Golf Saudi, declaring that LIV Golf could create their own majors if the four major organisations refuse LIV players.