Opinion: Hypocrisy and PR get-outs: My problem with LIV Golf...

LIV Golf may become a popular and watchable product one day, more so than the PGA Tour, but the principles of the participants are all over the place. 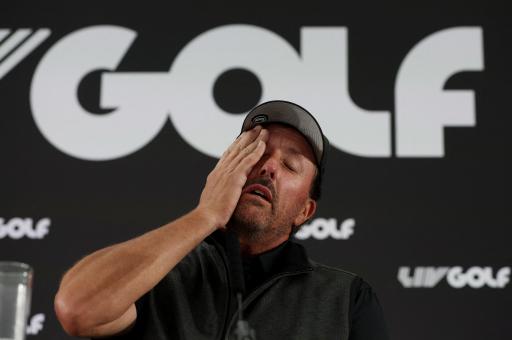 Not to sound boring, but there are many, many flaws to the LIV Golf Invitational Series. From the cooperation with Saudi Arabia to the financial desire taking over from competitive desire, there really are so many flaws.

But the hypocrisy is the most annoying element for me and the hypocrisy exists because of the people who are bankrolling the series. I want to explain why.

One positive that many of the LIV Golf rebels have piped out for leaving their respective tours is to play golf all over the world. Ian Poulter labelled himself as a "global golfer" at Centurion Golf Club.

This suggests that players such as Poulter want to use this new opportunity to play golf all over the world. But on the LIV Golf Series in 2022, they will play in a grand total of four countries: England, America, Saudi Arabia and Thailand.

Admittedly, the series will have 14 events in 2024 so there could be more countries involved by then. However, in 2022, they are attempting to "grow the game" in four different countries and two of them are already golf-mad as it is.

By the end of the PGA Tour this year, they will have held events in America, Mexico, Bermuda, Puerto Rico, Japan and the Dominican Republic, but the rebels have chosen to "grow the game" with LIV.

On the DP World Tour, the list of nations used on this schedule is absolutely vast. From the Middle East to Africa and all over Europe, there are countless chances to become and continue to be "a global golfer."

Phil Mickelson told us that he wants to find balance in his life, in fact, he used that word seven times in his press conference at Centurion Golf Club when referring to his time spent skiing and hiking with his wife Amy.

The six-time major champion also pointed out he is a lifetime member of the PGA Tour, which means he isn't tied down to play a certain amount of times each season. So if he stayed on the PGA Tour, he could easily find the balance he is clearly aching for.

Louis Oosthuizen said it is a pity that we don't have more team golf events all over the world. He said this in the same press conference in which he also said he wants to spend more time with his family on the farm. So is it the farm or the global events he would like to focus on, as he would have to miss out on one or the other?

The same point is relevant to Poulter and McDowell. The 2010 US Open champion spoke about being away from his family for 30/35 weeks a year, pointing out that golfers admittedly have "a pretty sweet life."

However, as one of the most vocal LIV Golf rebels, I assume the Northern Irishman is planning on playing in 2024 when the new series has evolved into 14 events. This could become 18 events if he was to play in all four majors.

Throw in potential DP World Tour events, the same tour which McDowell encouraged to act independently on June 9 after the first round of the first event in Hemel Hempstead, and he is back to having another busy schedule. A 30-week schedule perhaps.

McDowell, and quite obviously other players, don't intend to play a lot less golf. They have piped out the family and work-life balance rhetoric to make an excuse for defecting to Greg Norman's tour.

Now I'm not an idiot. If I put all of these points in front of the players and they answered them truthfully, they would say: "Fine, I'm playing for the millions and millions of pounds."

But the reason we will never, ever hear this truth from any of the players is that, as was pointed out by one reporter at Centurion, each and every player now effectively works for the PR department of Saudi Arabia.

"The murder of Jamal Khashoggi was reprehensible -  We want to grow the game - I love the team format." These are the phrases each player will have been trained to say and told to say. For the contracted players, I imagine it must be one of the many guidelines of their documents.

You could play a game of LIV Golf bingo at the press conferences using these phrases. We will never hear the truth from these players because they are now integral cogs of the Saudi Arabian sportswashing machine.

They have no choice but to constantly contradict themselves and fall victim to the hypocrisies I've pointed out. As Rory McIlroy said, they've made their bed and they'll have to lie in it.