Phil Mickelson has explained the circumstances surrounding his famous gorilla video where he welcomed commentator David Feherty to the LIV Golf team. 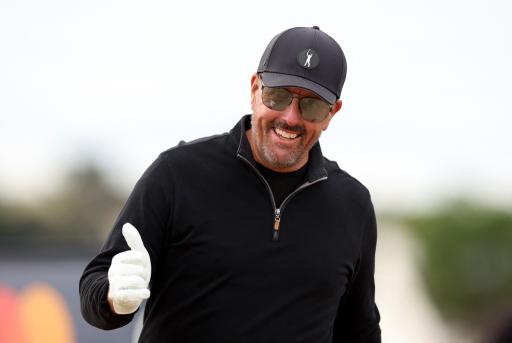 Phil Mickelson spoke of finding a better balance in his life after returning to the world of golf following his exile from the game.

It seems like such a long time ago now, but it was on 8 June at Centurion Club just outside London that Lefty re-emerged to face the media.

That awkward and bizarre press conference was telling in many ways. Mickelson explained his issues with gambling.

At one point his financial security would have been threatened if he didn't address it, he said. He previously described his gambling as "reckless".

He also drew fits of laughter when our own Matt Chivers asked this question.

But one thing Mickelson mentioned was that he enjoyed having the opportunity to travel more and see his family in his four-month hiatus.

"I have had a four-month break from the game that I have not had in over three decades," he previously said.

"I've had an opportunity to spend time with my wife, Amy, a bunch, and travel parts of the world and spend time at a place we have in Montana skiing, and hike in Sedona, what a beautiful place that is.

"It's given me time to continue some of the work and therapy I've been working on in some areas that I've been deficient in my life.

"And this is an opportunity that allows me to still have golf in my life, but also have a balance where I can be more present, I can be more engaged with the people I really care about. And that is -- that is why when I think about being a part of LIV Golf, I feel so good about it."

When LIV Golf announced the signing of David Feherty, Mickelson welcomed him to the team with this clip.

Oh, and he did so whilst he was hanging out with the gorillas.

Anyway, Mickelson spoke about this after playing his first round in the third LIV Golf event at Trump National.

Mickelson was also heckled on the first tee and finished 4-over.

Asked to clear up the gorilla video, Mickelson revealed it was a birthday trip for his wife Amy.

He told the media: "Oh, eight months ago my wife -- we planned a trip for my wife's 50th birthday, which was the end of May, and we ended up spending a few days in a Rwanda and then we went to Tanzania.

"But that video was just a random shot. It looked like it was a preserve, but one day out of a month the gorillas come out of a jungle.

"There's like a wall there and they come out of the jungle and eat some of the eucalyptus trees for the salt and the stem, and we were lucky enough to see them on that day because we had a much better view of the entire family.

"Amy is all excited because a little baby gorilla came up to her and kind of bumped into her. She seems to have that effect on all animals. They all come to her. But it was a really special trip for us."

New LIV Golf signee Henrik Stenson asked: "Did the gorilla bring a birthday present to her?"

Mickelson joked: "They sang happy birthday for her."

Next page: Five players LIV Golf are desperate to sign