Henrik Stenson started well with life at LIV Golf by firing an opening round of 7-under 64 at Trump National in New Jersey, Bedminster. 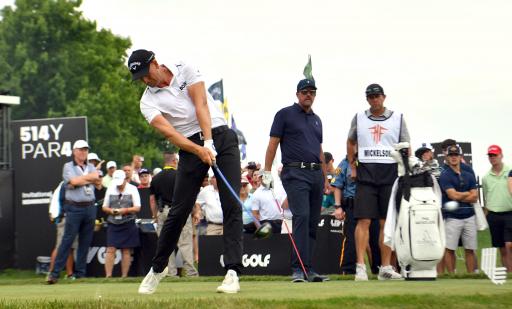 Henrik Stenson began life with LIV Golf in good fashion by carding a 7-under 64 at Trump National to share the lead at the $25million tournament with Patrick Reed.

Stenson, 46, began his week defending his decision to sign up for the Saudi-backed circuit for a reported fee of $50million.

It was a decision that caused him to be "removed" as Ryder Cup Europe captain and he will likely be replaced by former World No.1 Luke Donald in the coming days.

Donald fired shots of his own at the 46-year-old Swede earlier this week, claiming that if he was chosen as skipper to lead the Europeans in Rome he "wouldn't do a Henrik".

Stenson made four birdies on the front nine at Trump National. He made bogey at the seventh hole and made four more birdies on his back nine in the 48-man, shotgun start event.

The 2016 Open winner is part of "Team Majesticks" with his fellow Ryder Cup Europe stalwarts Ian Poulter and Lee Westwood. The young English player Sam Horsfield is also part of the team.

Reed shot the same score as Stenson. Dustin Johnson, too, fared well on day one with another solid showing on the controversial circuit and sits inside the top five players at 4-under par along with Carlos Ortiz.

Bubba Watson, the two-time Masters winner, was announced as the latest LIV Golf signee during the broadcast.

Watson, 43, is said to have commanded the same fee as Stenson. He said he "prayed to God" about his decision to join LIV.

The left hander is currently injured and will begin playing with LIV in September.

LIV debutants Charles Howell III and Jason Kokrak also sit inside the top-10 after 18 holes. As is Poulter and Brooks Koepka.

The winner of this tournament gets $4million and a further $5million is split between the winning team.

Here are the full prize purses.