LIV Golf's Greg Norman has given an interview outlining he is open to peace talks with the PGA Tour's CEO Jay Monahan and provided an update on OWGR bid. 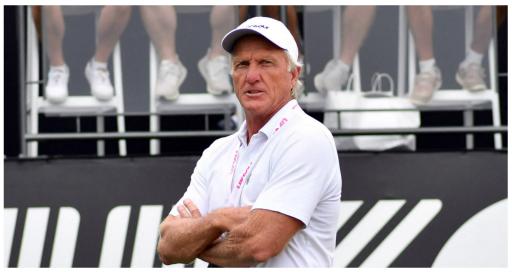 Greg Norman has claimed in a wide-ranging interview with the New York Post that LIV Golf is not intent on tearing town the PGA Tour.

Norman, 67, the chief executive of LIV Golf Investments, says that "every step of the way" the controversial circuit's model has been built to work within the ecosystem of golf.

Others claim this is not the case and that the Great White Shark, backed by Saudi Arabia's Public Investment Fund, is attempting to hijack the game completely.

The Aussie has been accused of having a "vengeful streak" in him and on a personal mission to bring down the American circuit after a previous, failed attempt to establish a similar league in the early 1990s.

"There's such a simple solution, it's ridiculous. I can't talk about it, because it's a process we've gone through with our legal team knowing everything that's in the rules and regulations.

"But it's not a hard fix, it's really not. And the longer they do it [suspend players], the less we're worried about it because we have more people coming in and wanting to invest.

"If he wants to come and sit down right here right now, I'd sit down with him and say, 'OK Jay, what's your problem? What are your issues?"

Norman again responded to a question about sporstwashing. Since his gaffe earlier in the year, he has largely taken a back seat and not given too many interviews or been involved in press conferences.

He said: "We are not a political organisation. We are here to play golf, serve fans, grow the game, and give additional opportunities to players. I also have seen first hand the good that golf can do around the world, and Saudi Arabia is no different.

"I offer my deepest sympathy to the families of 9/11. My heart goes out to anyone affected by that tragedy. While some may not agree, I continue to believe that golf is a force for good around the world, and that includes Saudi Arabia."

He added of the potential of LIV achieving Official World Golf Ranking accreditation: "The person who's at the helm is extremely intelligent and understanding about growing the game of golf - Peter Dawson. He gets it. Peter and I have had open discussions about this. I flew to Scotland to sit down and have dinner with him.

"He has our application, so he'll go through the right process to get it there. We brought up recusing Monahan and Pelley and [Martin] Slumbers [R&A CEO] and everybody who's had a negative comment about LIV, and they cannot vote. From an OWGR standpoint, if I'm in [Dawson’s] shoes, I'm getting independent legal advice.

"I spoke to [Augusta National chairman] Fred Ridley. They've weighed in pretty hard against LIV. The majors should stay Switzerland, they have a responsibility for one event, not a league.

"But it also tells you is there a cabal there? This is the slippery slope you go down about what LIV is starting to expose."