One potential LIV Golf League recruit had his deal withdrawn after the breakaway tour announced their U.S. TV deal with the CW Network. 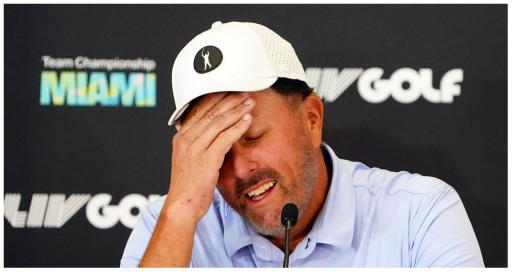 One thing undeniable about the LIV Golf League is the secrecy that surrounds it.

One of the biggest things the controversial tour likes to keep under wraps - apart from their finances - is the players they are targeting.

Then when they are good and ready they'll announce their new recruits at precise times to troll their PGA Tour rivals.

Lest we forget how they decided to handle the signature of Brooks Koepka. It was during one of commissioner Jay Monahan's press conferences.

How's that for timing, eh?

Then the Australian took to the airwaves once again to try defend the league's Saudi backers and tell Tiger Woods and Rory McIlroy he's going nowhere.

Norman insisted they do want a return on their huge investment. But LIV Golf are yet to add any more players to their roster.

One LIV supremo promised all of their signings would be sorted before the end of 2022.

It was previously reported Mito Pereira's deal has already been penned after the Chilean changed his management company.

Yet in recent months there has been quite a lot of chatter about discontent behind the scenes. They've lost two executives.

And they've also yet to announce their full schedule for 2023, which will see players competing at 14 different stops.

It seems as though LIV's TV deal has had a knock-on effect with regards to one potential recruit.

According to Barstool Sports' Dan Rapaport, a player who was "on the fence" reportedly had his deal taken off the table when the papers were signed with the CW Network.

"One player on the LIV fence told me LIV pulled their offer once they got the TV deal and will come back to him with another offer. He seemed to think the offer will now be *lower* since they're going to get more exposure with the CW deal. Interesting wrinkle."

It would be interesting to find out who this player was.

Who will be the next LIV Golf signing?

Quite simply from what we have seen so far absolutely nobody is off limits.

Kevin Na revealed last October he was willing to go on a recruitment drive and claimed one PGA Tour player was "90 per cent certain" he would be jumping ship.

This player was allegedly Si Woo Kim, but he remains with the PGA Tour and has already tasted victory this season.

As many as four PGA Tour players have been granted releases to compete in next month's PIF Saudi International, which sees more than 60 LIV players teeing it up.

Next page: The next shock LIV Golf signing?