A judge now has to make a huge ruling in LIV Golf's antitrust lawsuit against the PGA Tour after attorneys for the American circuit described an "impasse". 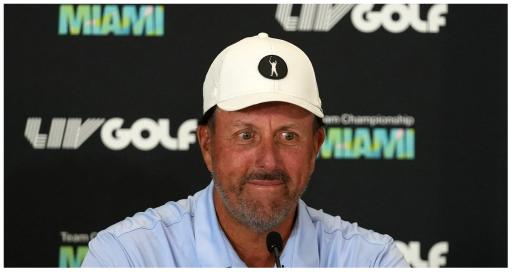 Unsurprisingly, LIV Golf have become deadlocked with the PGA Tour in a fight for information in the antitrust lawsuit.

We are sure by now you have heard the controversial series is backed by Saudi Arabia's Public Investment Fund [PIF].

PIF and its boss Yasir Al-Rumayyan can't agree on the production of any documents or what information to share with their rival.

PGA Tour lawyers want to depose Al-Rumayyan - who is also the chairman of Premier League football club Newcastle United - arguing it is really the businessman who is the "wizard behind the curtain" and pulling all the strings.

So not Greg Norman.

Attorneys for LIV have argued that PIF has no involvement in running the league or its day-to-day operations.

In court filings earlier this week, attorneys for LIV argued the production of certain documents would run afoul of Saudi law.

Furthermore, LIV attorneys argued that any further discussions with their rival will have to be limited to non-confidential documents under certain conditions.

Two of those conditions include "the preservation of the fund's sovereign immunity" and having a Saudi law expert sign off on what may be produced.

Of course, the PGA's attorneys rejected this argument.

In court documents, they wrote that they were now at "an impasse", describing LIV's approach as "take-it-or-leave-it".

They said LIV were trying to "cherry-pick" what it wishes to disclose.

It means that now federal judge Susan van Keulen now has to make a huge ruling.

She had previously asked both sides on 13 January to produce a joint status report on the discovery process, hoping that some sort of an agreement could be struck.

We really have no indication as to how this will go.

Hudson Swafford, Matt Jones and Talor Gooch were just three LIV players who were banned by the PGA Tour.

All three wanted to participate in last August's FedEx Cup playoffs and asked for a temporary restraining order to allow them to participate.

Gooch, in particular, has come under the spotlight.

The PGA Tour subsequently countersued their rivals, accusing LIV of unfair competition by offering players - such as Dustin Johnson  - lucrative deals to break their contracts.

This legal fight initially began when Phil Mickelson and 10 other golfers sued the PGA Tour for suspending them after they joined LIV.

A month later, LIV joined the lawsuit as a plaintiff, prompting many players to drop out.

Bryson DeChambeau remains involved in the legal action over claims the PGA Tour is refusing to pay him bonus money.

LIV is alleging the PGA Tour has a "monopolist" strangle hold on the world of professional golf.

The PGA Tour argue LIV is nothing more than sportswashing. The trial is currently scheduled to start next January.

On the other side of the pond, things will be resolved much more quickly.

The DP World Tour will find out if they have the legal power to ban LIV players next month.

One LIV player, Henrik Stenson, has the confidence they will prevail.