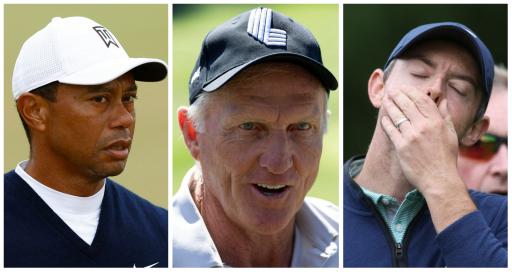 Greg Norman has insisted LIV Golf's Saudi backers do want a return of investment as he claimed: "Golf has been stuck in a box for 53 years".

The terms of the deal have not been made public but it appears that their YouTube streaming days are over, with those wanting to tune into LIV having to download the CW network app for future coverage.

The Great White Shark spoke to NewsNation's Dan Abrams about the deal, where he confirmed that LIV's backers do eventually want a return on their huge investment.

A host of top European names heading towards the end of their playing days have also signed lucrative contracts with LIV.

"We have a single source investor which I think is fantastic. Does he want an ROI?  100 per cent they want an ROI. There is nothing wrong with that. It is no different with what they [PIF] do with investing in Facebook, Uber and Boeing and EA Sports.
"They're investing for a reason. The thing a lot of people overlook here is the investment in the franchise model that LIV Golf delivers.
"And you've mentioned some of the iconic players in the game of golf. It's the first time I've ever seen these guys -- and I've played golf with some of them for 40 years -- it's the first time I've seen these guys so excited about the future.
"Why? Because the principle guys own a percentage of the franchise. They own their franchise. They build it out to create wealth for themselves.
"And that was one of the main reasons for me for these independent contractors to give themselves the ability to create the opportunity and have options to have more wealth for themselves."

Related: This clue gives us an idea of LIV's next signee

Norman was also asked about Tiger Woods' most recent comments, calling for the two-time Open champion to leave LIV Golf in an attempt for the PGA to potentially have peace with their rival.

Rory McIlroy has also called for Norman to step down.

With a smile on his face, Norman said:

"Look, I'm not going anywhere. My investor has got the utmost confidence in me."

Greg Norman talks LIV’s new TV deal and the exciting future - “golf has been stuck in a box for 53 years.” pic.twitter.com/UmieLXjoGR

Norman's latest comments come as it was revealed - unsurprisingly - there is now an impasse between LIV and the PGA Tour in their ongoing antitrust lawsuit.

A judge now has to make a huge ruling.