Shane Lowry says LIV Golf not divisive: "We're in the bar every night!"

Shane Lowry offers his opinion on LIV Golf players Ian Poulter and Lee Westwood as he plays alongside them in Ireland. 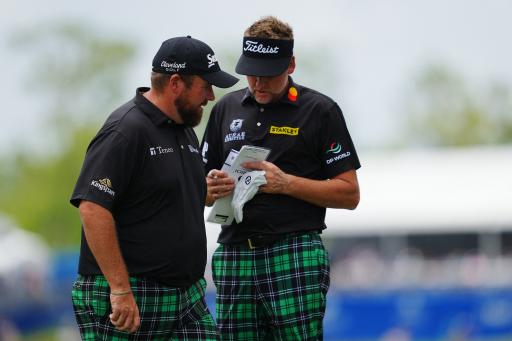 Open winner Shane Lowry admitted he has not witnessed any divisive behaviour behind the scenes after the emergence of LIV Golf.

Lowry is playing the JP McManus Pro-Am in a star-studded field that includes Tiger Woods, Rory McIlroy and the “rebel” players who have joined up with the controversial Saudi-backed series.

Those players, which include the likes of Lee Westwood, Ian Poulter, Sergio Garcia, Graeme McDowell and Martin Kaymer have reportedly become known as “The Sour 16” in some circles.

Earlier in the week DP World Tour pro Mike Lorenzo-Vera claimed that the general consensus among the players who have moved to LIV is that “we are so disappointed in them”.

But the major winner, 35, admitted that LIV Golf is “absolutely not divisive” and he is not aware of any secret players’ meetings.

“No, I never heard of any players' meeting, I think I would probably be a part of it after a while. I don't believe that's true,” Lowry said.

As he was speaking to the media, Westwood walked past. The Englishman has questioned why his Ryder Cup future should be threatened because of his decision to play LIV Golf.

“It's absolutely not divisive. Look, there's Lee Westwood, I like him,” joked Lowry.

He continued: “Look, like we all said, everyone has their own decisions for their own stuff and what's been here, we're down in the bar every night for a barbeque.

“We have the gala tonight; we are all sitting around having a good time and that's what we are here for.

“We are not here for anything else other than to raise a lot of money for charities and charities around the Limerick area.

“Yeah, that's all I really have to say on that.”

He described the strength of the field in Ireland as “outrageous”.

“I had a decent Irish Open last week. I played good golf yesterday.

“So, I'm pretty confident and I played some links golf here in Ireland towards the end of this week and head over to St. Andrews on Sunday morning and yeah I'm really looking forward to it.”