Was chat show banned from talking to Cameron Smith about LIV Golf? 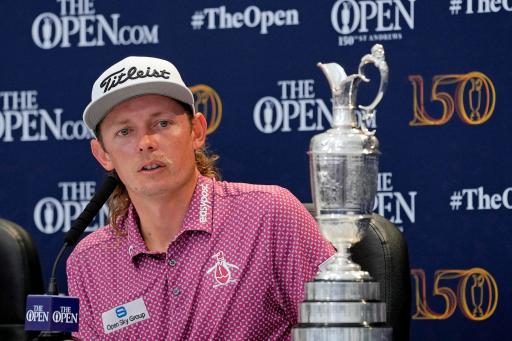 Cameron Smith immediately turned heads when he claimed his maiden major at the 150th Open Championship at St Andrews.

The Australian, 28, was involved in an awkward exchange when he was asked whether it was true he was going to be joining LIV Golf.

"I don't know mate," came the response from a clearly ticked-off Smith. "I just won the British Open and you're asking about that. I think that's pretty not that good."

There is a crazy rumour circulating that Smith has been offered in the region of $120 million to sign up for the Saudi-backed series.

Cameron Smith is in advanced talks to sign with @LIVGolfInv in a deal which is expected to make him $125m+.

It’s understood that Smith feels less anxious about joining LIV now that he is exempt to all majors until 2027. #SecretTourPro

It would be by far and a way the biggest signing for Greg Norman's LIV. Smith is reportedly coming round to the idea of jumping ship because he has major exemptions now until 2027.

The Queenslander appeared on Sunrise and the Today show in Australia to discuss his incredible win at the landmark major but the LIV tour did not get a single mention.

If Smith were to join it would likely see him joining the likes of Phil Mickelson, Dustin Johnson, Bryson DeChambeau and Brooks Koepka in receiving a signing-on fee in excess of $100million.

Smith is not the only Australian linked with a move to LIV.

Adam Scott and Marc Leishman have also been targeted and would reportedly join Smith in an all-Australian team.

Hideki Matsuyama, who withdrew from the most recent PGA Tour even with a sore wrist after putting three balls into the water on the same hole, is also rumoured to have been offered a lucrative deal.

South African golf legend Ernie Els, speaking at The Senior Open in Gleneagles, has urged Smith to stay on the PGA Tour.

"Cam is in a great position. He's entering his prime. He's 28. He's got time now to win  majors and I wouldn't want to put that under any danger of not happening,"' he said.

"So I would not at this stage go on any other tour where I might not play in a major again or be in a position to have to defend myself to play in a major."