LIV Golf players Lee Westwood and Ian Poulter have both backed Henrik Stenson to play his way onto the Ryder Cup Europe team after claiming victory on debut in the controversial series. 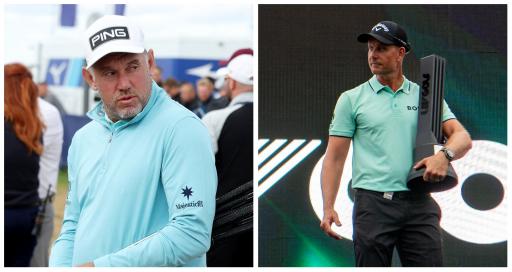 Lee Westwood has suggested Henrik Stenson could may well end up at the Ryder Cup in Rome next year as a player after the Swede claimed victory on his LIV Golf debut in Bedminster.

Stenson, 46, was stripped of the Ryder Cup Europe captaincy after signing with the controversial series for a reported $50million deal.

The Swede claimed in his first press conference as a LIV Golf signee that he did everything he could to remain at the helm, even negotiating with LIV so he could fulfil his captaincy duties.

Yet the Swede was - as the 2016 Open winner put it - "removed" from the position. In what could have been interpreted ominously, Stenson said the decision was something he accepted "for now".

Was Stenson really hinting that he could possibly take legal action over the decision!?

Stenson is now part of the "Majesticks GC" side. As well as picking up $4million for the win, Stenson also pocketed some extra cash as their team finished second.

Westwood told the press: "It was a great display by Henrik, full of nerves as well as skill.

"He was dreading seeing the media on Thursday, but as soon as that happened it sort of freed his mind. I'm disappointed what happened to him with the Ryder Cup, as we've had captains before who have played on other Tours.

"Padraig [Harrington] did last time, as he is a member of the PGA Tour. What's different with LIV?

"But if we now look forward it'll be interesting to see what happens with our DP World Tour membership and if we remain eligible for Ryder Cup qualification points. Because if we do, there is no question that Henrik, in this form, could play his way on to the team.

"He is only 46. I played in last year's match at 49. I don't know about the politics and wish they'd just make a decision on where we stand, but I can tell with you all certainty that if Henrik is back to his best or even approaching his best and his game is in this sort of nick, then as a European you'd want him on team in Rome."

The Englishman said: "I don't know how it will all turn out, but politics should have nothing to do with it when it comes to putting out your best Ryder Cup team. And Henrik like this gets in every time."

Luke Donald has been named as Stenson's replacement.

He has pledged to see the job through and not join LIV. The Englishman, who has been part of four winning Ryder Cup teams, says he's not sure the current situation will be resolved "any time soon".

Even if the LIV rebels are successful in not getting banned by the DP World Tour, Donald could easily circumnavigate the normal qualifying process by naming 12 captain's picks.

"I'm not sure they know what to do," Westwood said.

Next page: Garcia discusses reasons for joining LIV and his famous rant