Sergio Garcia has opened up on his decision to join LIV Golf, the Ryder Cup situation and his conversations with DP World Tour chief executive Keith Pelley. 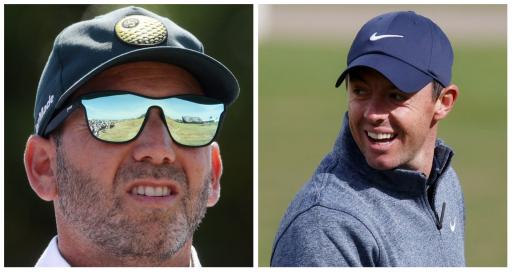 Sergio Garcia says he views his LIV contract as "kinda" his reward for a career in golf spanning nearly 30 years.

In an interview with Michael Collins of ESPN, the Spaniard has opened up on his decision to join the Saudi-funded breakaway tour.

The 42-year-old has revealed when he first began thinking of joining up with LIV, leaving the PGA Tour, that hissy fit at TPC Potomac and conversations with DP World Tour chief executive Keith Pelley.

Garcia said that he first started thinking about the series in 2021 but it wasn't until the Saudi International in 2022 that an offer was on the table.

He says that he spoke to Pelley about LIV, suggesting that he still wanted to retain his membership and play his "minimum" number of events.

But Pelley reportedly told him: "That's great, but we gotta do what we think is best for us and we'll see what that is."

Asked what was the hardest part of leaving the PGA Tour, Garcia said: "People probably think it was an easy decision. Obviously they offered us good money and I'm not gonna hide that. That is one of the reasons we're there -- it's not the only one.

"There's several others. Having more time with the family. Playing a little bit less. And at the end of the day, you feel like you've worked pretty much your whole life for something. This was the opportunity that you've been waiting for and working [towards] for 30 years.

Collins asked if this was "his reward".

"You have to think of a lot of things that come with it. Not only about the contract, but also what you're giving up. You're giving up the PGA Tour which you've played for 23 years, 24 seasons. And I've loved playing on the PGA Tour, every minute of it.

"For me, it was family and professional. It was as simple as that. Knowing there was the possibility of me not playing in majors again ever.

"Knowing there may be no more Ryder Cups ever, which means so much, like you know and everyone knows, but at the end of the day I could secure the future of not only my family but future generations of Garcias. That's difficult to pass [up]."

More: How much they all won at LIV Golf Bedminster

Garcia said the Ryder Cup is "part of my DNA".

The 2017 Masters winner says that if he cannot qualify for the 2023 Ryder Cup then he will simply move on.

Asked about his outburst at Wells Fargo, Garcia said: "It was frustration. Mainly for the way the official acted towards me. He didn't wanna hear anything that I had to say.

"He didn't wanna hear what I was trying to explain to him. Thankfully for me, at the end of the round they came and apologized.

"They actually told me that, yes, when I started looking for the ball, I found [it] within two minutes. So I even had a minute to spare.

"I think the frustration was the talks about LIV and thinking about going. Then that happened and in that moment you feel like you're getting a little bit screwed.

"When I found the ball I could actually hit it about 160 yards up the fairway.

"It was frustrating and that came out. I probably should have held it [in] if I could have but in the heat of the moment I guess sometimes you can't help it."

Despite the omission that his move to LIV was financially motivated, Garcia has rubbished talk that the players don't care about winning.

He said: "It is nice to get that upfront money and feel a little bit more relaxed because you feel like your family is taken care of. But a lot of guys on other tours when they go overseas, they get paid upfront to play other tournaments. And they still compete as hard as they can.

"And there's nothing wrong with that. They deserve that. I'm totally fine with that so I don't know why some of them are not fine with what we do here.

"I can assure you that when I'm out there and I don't hit a shot the way I want to, I still get frustrated. It's not like, "Aw well, it's no big deal because I already got paid." Or something like that.