When the PGA Tour should panic over LIV Golf, according to Paul McGinley

Paul McGinley explains when he thinks the PGA Tour need to panic as Brooks Koepka is expected to be announced as next LIV Golf player. 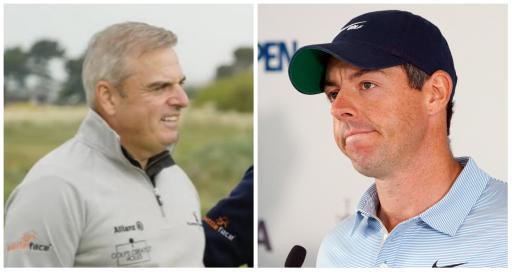 Former European Ryder Cup winning captain Paul McGinley says the PGA Tour will only be in crisis if top-10 players depart for the riches of LIV Golf.

So far the Saudi-backed league hasn't managed to pick off any of the world's top-10 players. Rory McIlroy, Justin Thomas, Scottie Scheffler and Jon Rahm have been resolute in saying that they aren't going anywhere.

Patrick Cantlay, the world No. 4, has previously said he was a "curious observer" of LIV Golf back in February. Cameron Smith has so far dodged questions, insisting that he wants to concentrate on golf.

Sam Burns and newly crowned US Open champion Matthew Fitzpatrick, who are also inside the top 10, have previously stated that they aren't going anywhere.

Four-time major winner Brooks Koepka would represent one of the most stunning moves to date considering the world No. 19 previously distanced himself from a move.

Bryson DeChambeau is also a LIV Golf signee. His deal is worth more than $100million, it has been reported.

There are reports that Viktor Hovland, who is ranked eighth in the official world rankings, is considering a move. But he has also previously suggested he isn't going anywhere.

Collin Morikawa took to social media yesterday afternoon to reaffirm that he isn't going anywhere. Nothing has changed his mind since he  pledged his loyalty at Riviera at the Genesis Invitational, he said.

"There's absolutely concern in the game, there needs to be a reaction from the current ecosystem within the game, and that includes the major championships. If that's going to come, we don't know, we'll have to wait and see.

"There's a long way to play out on this yet. Critically, at this moment in time, from the Tour's point of view, the very top players in the game are all very much aligned with the Tour.

"There's a lot of disgust, divisiveness with the players, and it's really sad to see. From guys standing shoulder to shoulder for all of their careers, and now there's a line in the sand and you're on one side or the other.

"There's also a lot of guys pledging allegiance to the Tour a few months ago, now gone down a different road. I know it's an evolving situation, but it's a really disappointing one if you're a traditionalist and love the history of the game."

He added: "The big key for [PGA Commissioner] Jay Monahan is that the really, really top players in the game - the top 10 I'm talking about - are very much behind the Tour, including Matt Fitzpatrick.

"Should three or four of them break ranks, then I think you'll be looking at a crisis period, but at this moment I don't think it is.

"It's very concerning, no doubt, but as long as the big superstars are staying on side with the Tours, I think they'll continue to go down the route they're going."

McGinley also spoke to Sky Sports about how the emergence of LIV Golf will affect the Ryder Cup.

Will LIV Golf defectors be allowed to play?

Dustin Johnson has resigned his PGA Tour membership so at present he is ineligible for selection.

He told the publication: "We had a meeting this morning, it's a real concern for us. You want the best 12 players from Europe against the 12 best from America, and that's what it has been built on.

"It's very hard to have team spirit when there's division among your own team, with some players deciding to go down a different route.

"There's a long way to play out on that, we haven't reached any conclusions on that, I think a lot of consultation with the players will take place.

"Henrik Stenson is the captain, the points haven't started yet, but by the time they do we'll have to have definitive rules in place as to whether the players who are playing LIV will be eligible or not."

Next page: LIV Golf mess will be sorted out by Jay Monahan, says Harris English